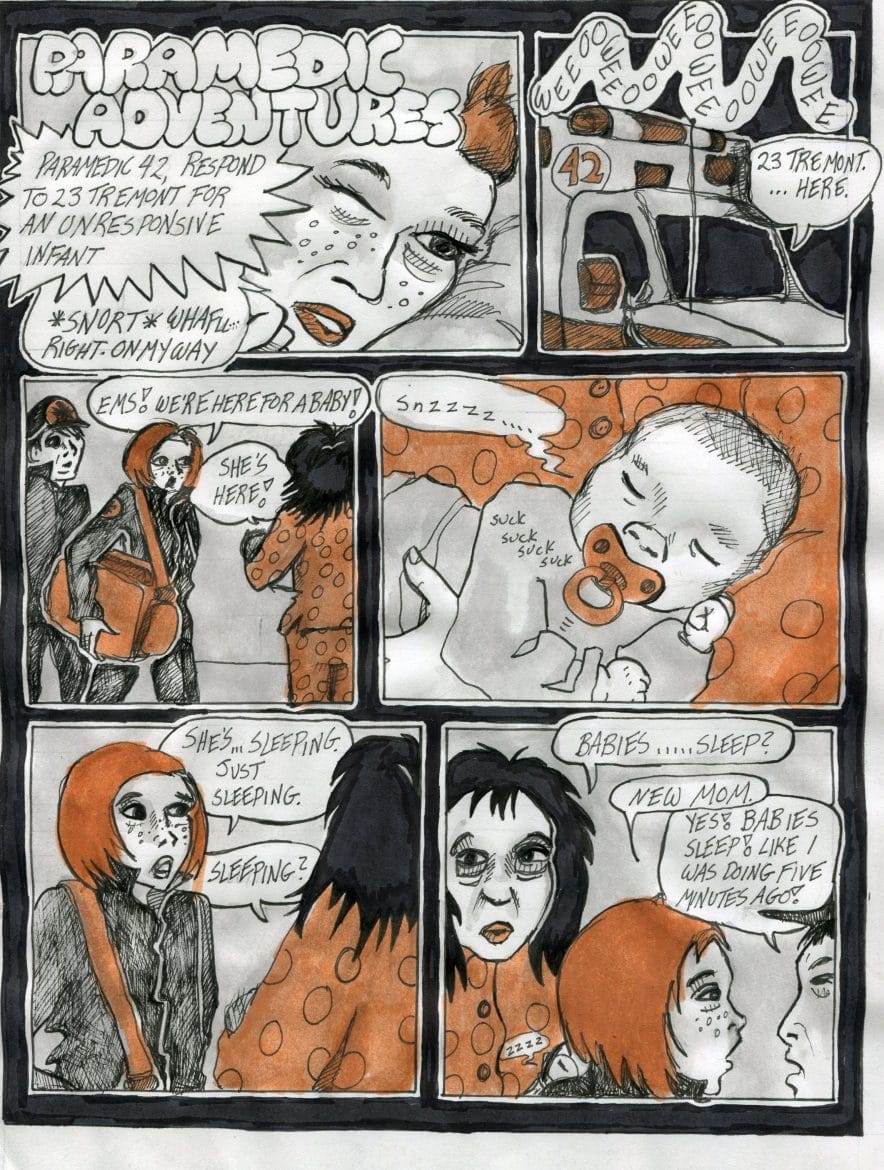 There is a small prayer that an EMS provider says whenever he is dispatched out to a particularly frightening call. “It’s probably bullshit.” It’s said with an expression of annoyance but is usually uttered to cover up a deeper feeling of unease. “Paramedic twelve, please respond to unconscious infant,” “Please respond to difficulty breathing, inhaler not working,” “Please respond to actively seizing toddler.” “Please respond to motor vehicle crash with unresponsive individual in driver’s seat.”

Hearing all these calls it is easy for the new medic to feel panic. Even the older medics hate responding to the “shitstorms” or the true emergencies where response and extensive intervention make all the difference between life or death. The most dangerous emotion a paramedic can feel when responding to an emergency, however, is panic. Panicky individuals make mistakes and put lives at risk. When I first ran to an ambulance as a medic student I was immediately brought down to earth by my preceptor. “Whoa, whoa, whoa,” he said, “We don’t run. We never run. Remember, it’s not our emergency. It’s their emergency. We walk, not run, to the ambulance.” I slowed down and we walked quickly to the truck. As I climbed into the passenger seat, my preceptor sat behind the wheel. “Never run,” he repeated as he turned on the lights and we proceeded to exit the station, “It doesn’t make a difference, it doesn’t help and besides…” We turned down a side street and stopped by the address given to us by dispatch. “It’s probably bullshit.”

Medics pretend to be annoyed by frightening calls that turn out to be “bullshit.” The “unconscious infant” is just a sleeping baby with a nervous new mother. The “difficulty breathing” is still alert and oriented and just needs another duoneb. The “actively-seizing toddler” has already finished seizing by the time we get there and only needs some oxygen on the way to the hospital. The “unresponsive individual in the driver’s seat” is merely high on heroin. Some Narcan and oxygen revives him on the way to the hospital, where he greeted by frowning deputies seated at his bedside. Medics put on a show for each other of being irritated that calls are less serious than first thought. “We got dispatched out for THIS?!!” But in reality we always feel a slight sense of relief. “Oh thank God!”

Statistics show that about 90% of 911 calls are not life-or-death emergencies. They are usually emergencies but do not require massive overwhelming response. We get a lot of “back pain” or “psych eval” or “nausea.” Even the scary calls usually end up being far less emergent than anticipated. When a medic says “it’s probably bullshit,” he’s not just hoping. He’s also stating what statistics (and no doubt his own personal experience) tell him. Yes, it’s probably bullshit.

But it’s not always bullshit. Every medic knows this as well. There are the calls where you encounter a blue, limp, unresponsive baby, or the woman with CHF lying on her bathroom floor with pink foam coming out of her mouth, or the pregnant teenager whose baby is already crowning by the time you get to her house. Even if you don’t get the call yourself, you still see the calls on the local news the next day. You walk into the station at the beginning of your shift as the TV in the lounge is blaring. A CBS12 reporter talks about the intoxicated driver who crashed into a telephone poll in Newburg last night. “A four-year-old passenger was also in the car and was ejected through the windshield. The child was transported to Newburg Medical Center where he was later pronounced dead.” “Jesus, who had that call?” you ask your colleague as he makes coffee in the lounge kitchen. “Paramedic twelve,” he answers, “I think they’re still at the hospital talking to the police.”

You think about how lucky you are not to have been working last night. You wonder what to say to your no-doubt shaken colleagues when they return to the station. You wonder if your own skills involving a pediatric trauma alert need a brush-up. They probably do. And as you make a note of enrolling in a PALS class before your certification expires this summer, a new call crackles over the station’s speakers. “Paramedic 32, respond please to chest pain, shortness of breath at the ‘Dunkin’ Donuts’ on 12 Main.”

“It’s probably bullshit,” your colleague says, standing by the coffeemaker.

“Yeah,” you reply, walking to your truck.

Phoebe Cohen has worked as a paramedic for three years. She works both as an interfacility medic (transporting patients from hospital to hospital) and a 911 medic (transporting patients from emergencies to hospitals). She started writing “Paramedic Adventures” when she discovered that working in EMS with fellow medics and EMTs mean working with a wealth of astounding story material. Gather a group of paramedics together for breakfast after any given shift and you will hear amazing tales for hours. “Paramedic Adventures” is meant to bring a humorous look to the lives of EMS workers and the realities they deal with on a daily basis. Each comic strip is a stand-alone episode however Cohen has been fleshing out a more serial type of “Paramedic Adventures” strip called “The Over-Caffeinated Medic.” “The Over-Caffeinated Medic” will have regular characters, storylines, and settings. This future strip, coming in September of 2018, will be a peek into the lives of medics and EMTs working in Florida and New England. It will be appearing at: https://phoebester6.wixsite.com/overcaffeinatedmedic  .