Outside the world of underground comix enthusiasts, Joyce Farmer is probably best known for her latest work, Special Exits (Fantagraphics 2010), a memoir (though the names are changed) of her experience caring for her parents during the last few years of their lives. Special Exits is Farmer’s first book-length comic, famously praised by Robert Crumb, but Farmer has been an important figure in comics since the 1970s.

I’ll get back to Special Exits in a minute, but first I want to make sure to tell you about her work from the 70s. I wish I’d been more familiar with it myself before I read Special Exits, because then I would have been even more blown away by the book. The memoir’s gritty seriousness and attention to the most mundane details of caring for aging parents is quite a shift from Farmer’s edgy, explicit early work.

Farmer was a contributor to Wimmen’s Comix, the first ever ongoing collection of comics by women, which ran from 1972 to 1992. (You can still get original issues for less than $2 from publisher Last Gasp — though if you’re not in the States shipping charges are steep.) Wimmen’s Comix was an important milestone in the history of women cartoonists. The collections focused on feminism, sex, and sexuality, and many well-known women cartoonists started their careers with their contributions to Wimmen’s Comix.

Just weeks before Wimmen’s Comix was launched, Farmer started the series Tits & Clits with her friend Lyn Chevely which ran until 1987 (a few issues are also still available from Last Gasp). As you can tell from the name, it was focused specifically on women’s sexuality, and intended as an alternative to the often sexist underground comix by men. 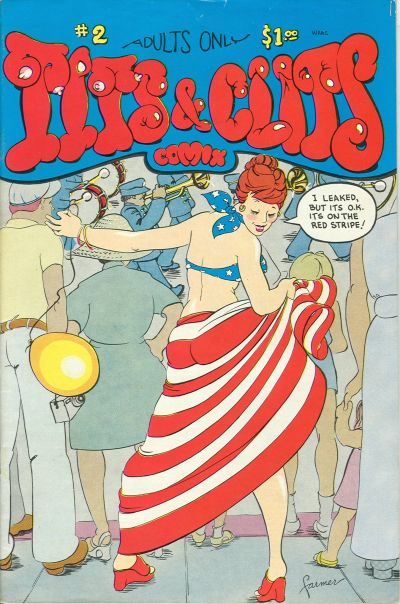 It’s hard to find many images from Farmer’s work from this era online — though the cover of Tits & Clits shown above is by her. Here is a snippet from a comic Farmer did for Wimmen’s Comix in 1976 called A Life of Her Own, about a sex worker who is violently attacked and becomes violent herself. Incidentally, I showed this to my students last year in an intro to comix class and wasn’t sure what their reaction would be, since it was so different from the polished full color fantasy stuff that they’re into. They really liked it — I think they were a little shocked by its edginess and weirdness.

One thing you can find online is the entire text of Abortion Eve (click on the image below), a comic that Farmer and Chevely created in 1973, just after Roe v Wade. As an example of graphic medicine, this detailed examination of the psychological and physical aspects of abortion is probably just as significant as Special Exits. The artwork is much less polished, which stands to reason as it was created 30 years ago, but the content is just as frank and unapologetic as that of Special Exits.

So Special Exits — Farmer’s memoir about her parents dying, published in 2010 when she was 71. I won’t get into details about the book here — you can read great articles in the LA Times and The Comics Journal, which provide insights into Farmer’s motives (documenting the details of death, including funny and ironic moments; exposing the shoddy care that many elderly people get) and her process (13 years of writing and drawing, continuing even after she developed macular degeneration).

In The Comics Journal review, cartoonist Paul Karasik talks about how, as a “comics snob,” he approached the book reluctantly: “Bad title. Ugly cover. Scratchy drawings. And soooo old school.” Karasik entered the book “kicking and screaming,” but others of us, maybe particularly those drawn to graphic medicine, might not be put off by any of the things he lists as barriers. We might not focus so much on the scratchiness of drawings, or the use of Wite-Out instead of graphic white or a Photoshop eraser, and instead place more value on an honest, relentless narrator, a compelling story, characters who stay with us long after we close the book. Special Exits has all these things and more.

Before you see Farmer at the upcoming conference, you might want to watch this great interview with her on Dangerous Minds, and get a sense of the formidable cartoonist you’ll have the honor of meeting. (As a huge fan of Farmer, I am horribly jealous that I won’t be there. I treasure the kind response she sent to my adoring fan letter.)

These are two (non-consecutive) examples of her unflinching story telling. As she says in the interview on Dangerous Minds, “If it [the book] flinched, it wouldn’t be the honest book I wanted it to be.” 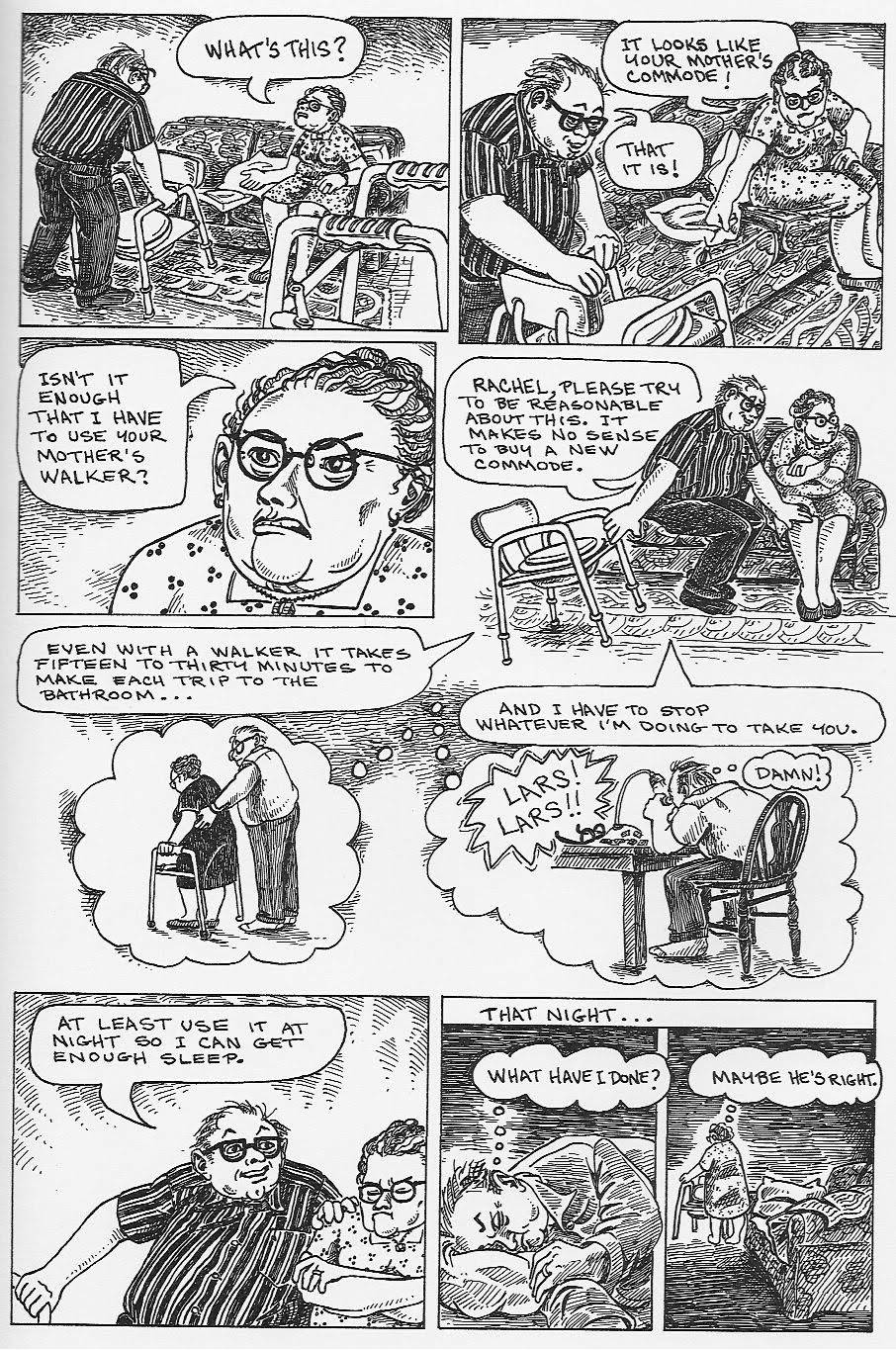 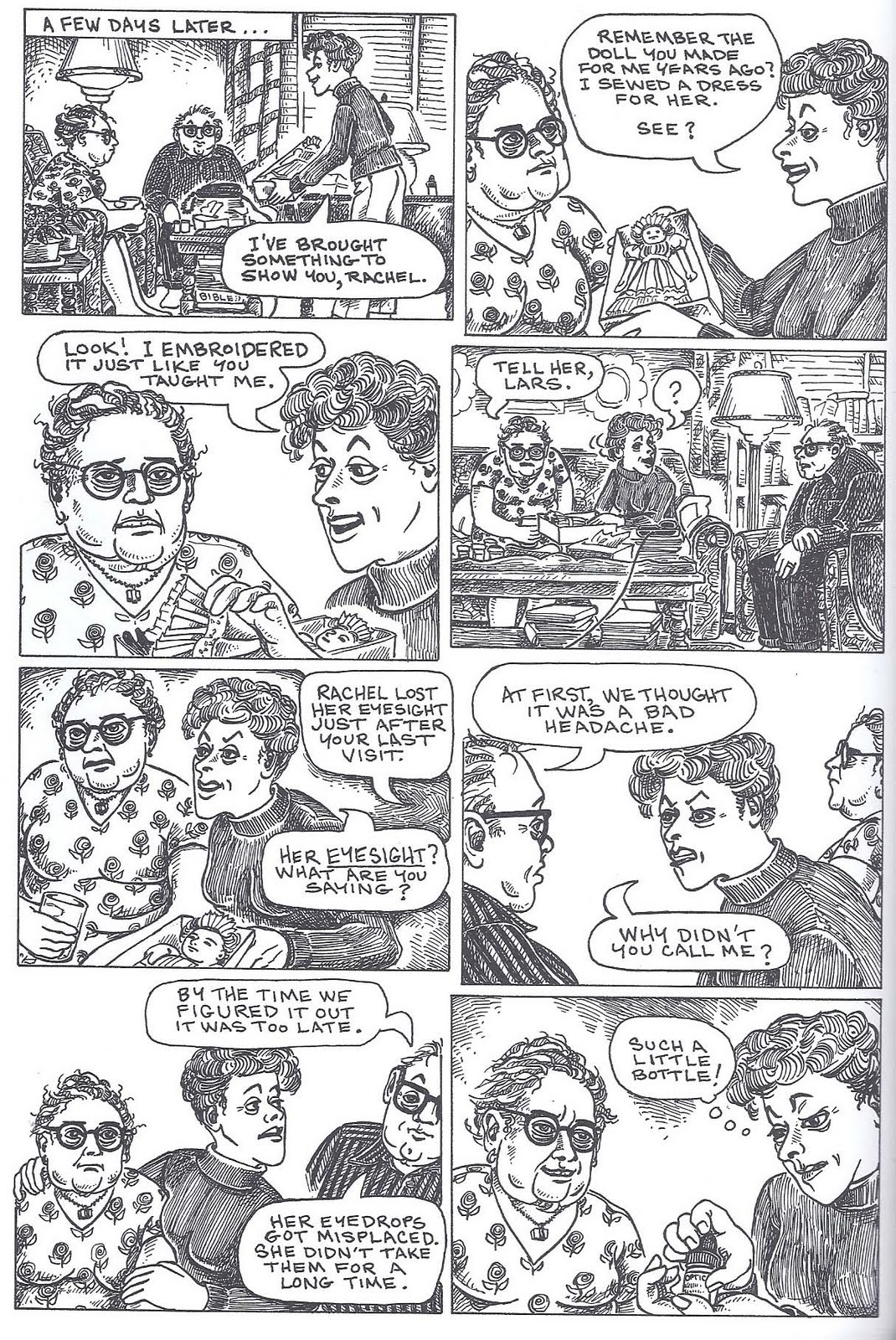 You can download a 17-page excerpt from the Fantagraphics site (scroll down to the bottom of the page).