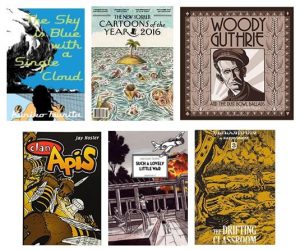 Medical Mentions is a new type of posting at graphicmedicine.org. The graphic works reviewed here are books whose primary topics are not medical, and yet they cover a medical topic with some depth at some point in the work. The rest of the work might be fictional or nonfictional, while the medical portion is often technical and five pages or more. The reviewer will usually neither recommend nor discourage reading the work, except when the rest of the work is deemed outstanding or terrible, respectively. Typically, six graphic works will be provided with one paragraph for each. With that in mind here’s Medical Mentions I:

The manga, Kuniko Tsurita’s The Sky Is Blue with a Single Cloud, is the first English translation of many (eighteen) of her short stories. There’s a lengthy essay (“The Life and Art of Kuniko Tsurita”) by Mitsuhiro Asakawa and the book’s editor and translator, Ryan Holmberg, provided at the very back—the front for English readers—of the manga. The essay states, “In fact, Tsurita may very well be the earliest female cartoonist anywhere in the world who succeeded in producing comics—sometimes about women, sometimes about her personal life, but sometimes neither—without being hemmed in by the commercial demands or gender-based genre conventions and stylistic strictures of mainstream publishing.” Her comics were published from 1965 (age 18) in Garo, a Japanese alternative comics magazine founded in 1964, until about 1981. In March 1973, she was diagnosed with Lupus—an autoimmune disease that causes one’s own immune system to attack healthy tissue—and died June 14, 1985 at 37. There’s very little online information about Tsurita (e.g., there’s no Wikipedia page for her). Her work is gender-fluid (e.g., most characters have no gender identification nor orientation), filled with non-sequiturs, surrealistic, dark to bleak, and opaque. The Sky Is Blue with a Single Cloud has very little overtly medical content.  Published about eighteen months after her diagnosis, only one story (Yuko’s Days) addresses medical issues, while from her diagnosis onward the last nine stories dwell on death. The title story (233-242), post the Lupus diagnosis shows with very few words a seemingly optimistic character riding a motorcycle toward a single cloud in the shape of a mushroom. For me, this brings to mind the film Ordinary People where Dinah Manoff (playing Karen) telling Timothy Hutton (Conrad) to have the best year ever, only to later learn (spoiler) she takes her own life. In Tsurita’s third story after her Lupus diagnosis, “Yuko’s Days” (215-232), a hospital appears like a prison, dungeon-like with many people on the same ward. Yuko’s words over many panels and several pages include: “It’s intolerable … How can they even call this a hospital room? The manic laughter, visitors being thoughtless and noisy, … and this sour smell … [clock or steps “tok”ing] the fear that I may never get out of here haunts me … Lupus erythematosus [causing scaly red patches on skin, especially face] … gamma globulin … white blood cells … L.E. antibodies … non-self-antigens …” To the patient it’s a foreign planet which leads to the patient dreaming about more understandable things … a tornado, garden, fabric, her youth mirrored by her sudden elder self; showing the shortness of time left. Finally, depression reduced by looking out from the hospital roof to an expansive horizon. In the U.S about 1.5 million people are diagnosed with a form Lupus (see Mayo clinic or National Resource Center on Lupus) for some more information, like symptoms, diagnosis and statistics.

This short biographical tale covers Julie’s best friend, Jen’s pregnancy and how it affected Julie’s relationship with her. At first Julie doesn’t want to become an adult with responsibilities. She’s supportive of Jen’s needs in her own weird way; like wanting to go hiking with Jen for relaxation and later having trouble building a changing table for the unnamed & not yet born “thing.” Julie found she was able to “maintain our prior dynamic and apply it to the new maternal situation” within limits. Julie’s simple line drawing is somewhat cartoony and well-matched to her light dialogue and narration. This short piece is very funny. This New Yorker anthology also has two single-panel cartoon sections that emphasize medicine (Just What the Dr. Ordered) and mental health (On the Couch). 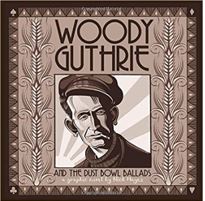 This graphic biography covers Woody Guthrie’s life from his teens through 1940 when he composed This Land Is Your Land. The book is not paginated. About two-thirds of the way through the book there’s a flashback to his mother, Nora, who was shunned because of seeming mental illness. She was later diagnosed with Huntington’s Chorea which, according to this biography, is “a rare degenerative disorder that chewed away at the core of the brain,” which caused all of her mental health problems. Her children had a one-in-two chance of inheriting this disease. Woody did so and died in 1967 at age 55. The books woodcut-like drawings with a brown wash are impressive. I found that the lack of dates in the book made some parts of it hard to follow. This graphic work is a good representation of Woody’s life and songwriting in Oklahoma during dust bowl days of the Depression in the United States.

Clan Apis, from extensive well-documented research by Jay Hosler, provides an excellent presentation of the biology bees. “Killer Bee,” in the afterward of Clan Apis, is a hilarious and ironic six-pager of Jay getting bee-stung, finding he’s allergic to its venom, and the treatments that follow. He had been stung many times before but instead of brushing off the stinger this time he grabbed it which “will only inject more venom” into himself. This short story is ironic because Jay spends the first 150 pages of his graphic non-fiction work explaining the wonderment of bee life. His black and white drawings are beautiful and naturalistic. Clan Apis provides a lot of information and humor by having the bees speak for themselves. I highly recommend this tale. Clan Apis received a Xeric Award in 1998.

Such a Lovely War is a memoir of childhood with historical background to the early days of the United States’ involvement in Vietnam after France’s military intervention ended. Marcelino (“Marco”) was born in 1957. Marco’s father, Khánh, was the cultural attaché of South Vietnam to the U.S. who was called back to Vietnam as a close advisor to Prime Minister Ngộ Dinh Diệm. The memoir ends soon after the U.S.-backed coup against Diệm. Marco’s mom, Yvette, was a French citizen. The medical mention occurs on pages 135-136, when Marco discusses his mother’s bipolar disorder. Marco wrote over two panels, “In Mama’s case, isolation and war set off this terrible disorder. It wasn’t easy holding back Mama’s tidal waves and her sense of being sick of everything. She swung from dejection to vituperation. Fatigue or emotion could send her spiraling toward one or the other.” This graphic memoir is finely drawn with water-color washes providing the visuals for the hot tropical climate.

The Drifting Classroom is a horror manga in three massive volumes (about 760 pages each). The horror begins with a grammar school exploding and all that’s left is a giant hole in the ground. The volumes cover the children’s survival with almost no adult supervision; battling weird creatures, each other—like in Lord of the Flies by William Golding—one adult, and the environment they are thrust into. Time displacement, post-apocalypse earth, and environmental issues are major themes. The medical occurrence is in volume three (chapter 35, 318-364 with many of these pages taken up with fighting off creatures and peers) when one student is diagnosed with appendicitis and operated on to remove his appendix. The diagnosis comes from a precocious student. The operation is very realistic, including the children’s roles and how they learned to do it. In all three volumes, we see how the students find their way in this hazardous landscape. Connections by one of the children to his mother back “home” remains strong and, at times, is very helpful. I recommend this very dark series.

That’s it for this first round of Medical Mentions. More will follow periodically.