Medical Mentions is a different type of posting at graphicmedicine.org. The graphic works reviewed here are books whose primary topics are not medical, and yet they cover a medical topic with some depth at some point in the work. The rest of the work might be fictional or nonfictional, while the medical portion is often five or more pages. The reviewer will usually neither recommend or discourage reading the work, except when the rest of the work is outstanding or terrible, respectively. Typically, six graphic works will be provided with one paragraph for each book with the medical mention. The first medical mentions reviewed can be found at Medical Mentions I. With that in mind here’s Medical Mentions II: 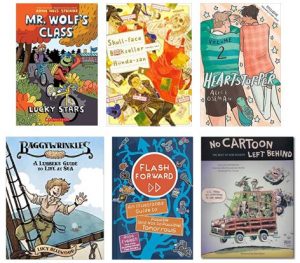 Mr. Wolf’s Class is an ongoing series that has four volumes so far (volume One has no subtitle, Two: Mystery Club, Three: Lucky Stars, and Four: Field Trip). The stories revolve around a grade school classroom of anthropomorphic students and teacher (yes, the teacher is a wolf named Mr. Wolf). The series is very funny and each character has their perspective well-developed. In the third volume, Lucky Stars, Sampson, a frog, is stuck trying to complete Mr. Wolf’s assignment to write a personnel narrative because Sampson thinks his life is so boring. He falls off his bike and breaks his arm. We see how the bone is set, a cast made, and how Sampson has to learn to work with his non-dominant hand (pages 60-78, 84+). He discovers he’s not so boring because we all have a story to tell. Field Trip has a briefer medical mention (38-39) when a guide (Huckleberry; a hound?) tells Mr. Wolf’s class about climate change while touring the woods. I recommend these works for middle school and grammar school students.

If you want to learn about Manga book publishing and selling, then the Skull-face Bookseller Honda-san series provides a lot of great information in an entertaining way. Most of the works take place in a bookstore which has a huge Manga department (about 60% of the Japanese population reads Manga). The whole Skull-face series is four volumes with each volume emphasizing a different aspect of the book biz. Volume One emphasizes the booksellers; Volume Two the bookstore customers; Volume three the marketers—those bringing samples and pushing titles from the publishers; and Volume Four on non-store activities, especially e-books. What’s medical? There are three medical occurrences. The author draws realistically, but to avoid depicting the real people, she provides masked substitutions. Each mask is drawn so well, you can sense that there is a face behind each one. She depicts herself as a skeleton, hence calling herself “Skull-face.” The second is a medical story that’s near and dear to my heart, when she writes in Volume Two chapter 13 about a book addict who hauls away three bags of books—even breaking his backpack—with a single purchase. There’s a non-graphic work called A Gentle Madness: Bibliophiles, Bibliomanes, and the Eternal Passion for Books by Nicholas A. Basbanes that tries to explain, among other things, book addiction (I own but haven’t read it … yet, naturally). Finally, Volume Three has a few pages on the Ebola virus in West Africa from 2014 (30-31) and one of the bookseller’s (section chief) wears a plague doctor mask; a plague doctor mask looks like a long beak covering one’s mouth and nose and covering eyes with goggles. It prevented getting the plague in the 17th century not because they had included pleasant herbs to ward off “bad or evil air,” but for the reason that masks work today, because it reduced the chance that a microbial virus would enter our respiratory system. All the volumes, especially the last one, has a large section at the back that provides additional stories, including fourth-wall breaking about writing Manga, character explanations, and translator notes. If you’re a bibliophile, I highly recommend this series, otherwise … why aren’t you a bibliophile?

The Heartstopper series by Alice Oseman is about young (high school) love. Volumes 2 and 3, especially, shows some attempts by other people to prevent this love from blossoming. These attempts include bullying, physical fights, domestic abuse among peers and homophobia. (Warning realistic self-abuse is mentioned in the next sentence.) The unfortunate results in some self-hating with personal cutting, an eating disorder scare and mental health issues. However, there is much more positivity coming from these first three volumes in the series. Many friends and most family members are very supportive. There’s Nick who we see working out his sexual orientation, while Charlie knows himself, but is unsure about Nick. While they get to know each other, we see how many other characters’ sexuality unfolds. Heartstopper shows that the LGBTQ community is often accepting of each other; while some non-LGBTQ people are poor at being inclusive or tend to not empathize with others’ sexuality or orientation. Heartstopper is drawn in black and white with bluish-green wash. There are many internet acronyms used throughout. I’m showing my age, because I had to look most of them up. But there was one I couldn’t find (alkjsdfldsg?). Learning self-acceptance; sharing-with-caring-person one’s pain and concerns, rather than hiding them; and having a supportive family and friends can make all the difference. At one point in Volume 3, Charlie texts Nick: “Why is being out so complicated?” (93) And someday (I hope) it won’t be‼️ I highly recommend this series (there’s at least one more volume in the works). Heartstoppers, in the Author’s Note, provides three online support networks (The Heard Alliance, The Safe Zone Project, and The Trevor Project).

Baggywrinkles is narrated by the author about her love of tall ships; the wood ones with the big multi-sails and lots of ropes. “At the tender age of seventeen I ran away to sea. (7)” She provides a history of these types of ships from her senior year. And Baggywrinkles are “…handmade … rope yarns … to form a soft, brush-like, cylindrical buffer designed for the protection of a ship’s sails against chafing. (21)” And what’s the medical mention? Is it possible to provide a reasonable history of tall ships without writing about scurvy? I think not. Lucy provides a fun chapter (97-116) with historic details of occurrences (including Hippocrates (460-375 BCE), symptoms (woozy, bleeding gums, fever, aching legs and later death if untreated, 102), diagnosis, and cure (vitamin C or fruits therewith). Lucy provides the lack-of-vitamin-C diet of sailors in 1757 (105). The illustrations are delightful, the story is funny, and Lucy provides a great education about the tall ships she loves. I highly recommend Baggywrinkles.

Flash Forward: An Illustrated Guide to Possible (and Not so Possible) Tomorrows Edited and with commentary by Rose Eveleth with Matt Lubchansky & Sophie Goldstein; ISBN: 978-1419745478; Abrams ComicArts; April 2021; hardcover; 272 pages.

Rose Eveleth is the creator of a podcast network: Flash Forward Presents. She asked twelve cartoonists to predict the future and Flash Forward: An Illustrated Guide to Possible (and Not so Possible) Tomorrows resulted. These stories are wonderfully told and drawn by people who’ve produced alternative comics. Writers/Artists (and their topic) include Box Brown (truth/lies), Blue Delliquanti & Ziyad Y Ayoub (gender), Sophia Foster-Dimino (animal rights), Julia Gfrörer (AI art), Sophie Goldstein (avator icons), John Jennings (pirating pharmaceuticals), Chris Jones & Zach Weinersmith (fake news), Matt Lubchansky (sleeplessness), Maki Naro (crime in space), Amelia Onorato (climate change/undersea living), and Ben Passmore (smart cities). These stories could stand by themselves, but Ms. Eveleth provides a wonderful commentary of 4-7 pages after each piece. These commentaries go beyond the graphic stories to explain how each topic applies in the present and often how the future isn’t that far away. The selection of topics is well-rounded. Ms. Eveleth’s website explains that she “…explores how humans tangle with science and technology …[and] demystifies the future …” I’ll mention a few medically related stories. John Jennings’ powerful piratical tale is about finding mercy among ourselves when the powers-that-be are merciless and control something essential for a reasonable quality of life. What happens when we’re dependent on a pharmaceutical company that has a monopoly on a drug needed to stay alive or alleviate wretched pain or it’s prohibitively expensive? Sophia Foster-Dimino’s story on animal rights starts with humans not eating them and moves on to animals being stressed performers against their will. There’s a vaccine metaphor in the commentary (157) to Jones/Weinersmith’s fake news tale; how do we inoculate ourselves to recognize and not be taken in by misinformation (e.g., discredited Wakefield’s small 1998 MMR study; which could be correlated to current—but totally preventable—measles outbreak in the U.S., and—with other causes—having deadly consequences throughout the world). In Ayoub/Delliquanti’s Bye-Bye Binary, there’s an unfortunate commentary: “What if Gender Was More Like Hair Color?” that is, totally under the individual’s control to change or not. But isn’t this the same argument that homophobes use against the LGBTQ community? To its credit the commentary argues that everyone should be accepting of everyone’s gender/sexual orientation regardless of personal nature/nurture reason. There’s Onoroto’s relatively gentle tale of 22nd century undersea living—by those who could afford it—because there’s less livable land due to climate change’s ocean rise. It’s “gentle” because it shows those above/below the sea living without conflict (e.g., population refugees, species loss, etc.) that would likely occur to get to the point of undersea living. Finally, what if we could medically-induce a lot less sleep to have more daily hours to accomplish our desires (Lubchansky’s Never Lay Me Down to Sleep)? The commentary, in part, discusses sleep’s purpose. What would the side-effects truly be? When I was in college, I tried to sleep an hour, study an hour, sleep … throughout the night; which I thought might help my studies. My attempt lasted part of one night!

Rob Rogers is the award-winning freelance editorial cartoonist syndicated by Andrews McMeel Syndication. In his 25-year retrospective (No Cartoon Left Behind!) from his days at the Pittsburgh Post-Gazette, Rob has well over 500 editorial cartoons. He includes a biography. Chapter 3 is entitled: The Top Ten Reasons I Didn’t Go into Medicine. His father was a doctor who helped perfect “lung lavage” (“saline used to wash out a patient’s lungs (24); led to Rob’s first editorial cartoon of “My dad the lungwhasher [sic]” with two lungs on the wash-line after being soaped up). Rob’s reasons—accompanied by a funny cartoon for each—for staying away from medicine countdown included “Ten: Dad’s feet are too darn big. …Eight … too many big words … Three: Everyone’s so darn serious. … One: There are too many bodily fluids.” (33-4, 37-8). But that didn’t stop him from periodically bringing medicine into an editorial cartoon. He provides dates published and additional commentary for each cartoon. Chapter 16 (197-208) has 38 “Sick Cartoons;” including a doctor treating a patient under duress because, “it was easier to get a handgun than affordable health coverage” (198) and a pharmacist telling a customer “You may experience upset stomach, diarrhea, anxiety, depression and night sweats …and that’s just after hearing the price.” (204) The next chapter (209-214) of fourteen cartoon has him taking on Big Tobacco. He has fifteen conception related cartoons (282-286). Most of his cartoons are hilariously politically-biting. Other subjects include presidents from Reagan to Obama, Catholic Church, the world, environment, angry white males, Women on the Verge (e.g., page 195 one cartoon has African-American-Woman Doctor asking: “Why did it take so long to discover the link between estrogen and ovarian cancer?” White male Doctor responds: “Because men don’t have ovaries” as they both walk by directional signs: “Prostate Cancer Research,” “Testicular Cancer Research,” and “Erectile dysfunction wing.”) I highly recommend Rob Rogers’ book, including his more recent cartoon collection, Enemy of the People (2019).

This concludes Medical Mentions Book Reviews II; the next installment will occur after more books are gathered and … enough sleep.