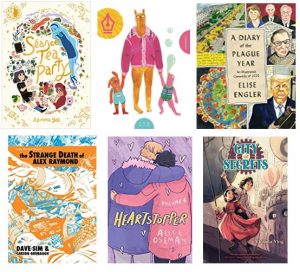 Medical Mentions is a group of graphic works. The graphic works reviewed here are books whose primary topics are not medical, and yet they cover a medical topic with some depth at some point in the work. The rest of the work might be fictional or nonfictional, while the medical portion is often technical and five pages or more. The reviewer will usually neither recommend nor discourage reading the work, except when the rest of the work is deemed outstanding or terrible, respectively. Typically, six graphic works will be part of the review with one paragraph for each. Prior Medical Mentions can be found at I, II, III, IV. With that in mind here’s Medical Mentions V. 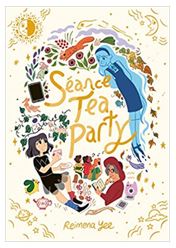 A sprained ankle in Séance Tea Party by Reimena Yee brings the old and new together in this wonderful ghost story which has some life truths to keep childhood magic real into adult and elder years. Lora navigates her friendless adolescence with her ghost friend, Alexa; while Alexa learns of her own history. Drawn with colors often providing the boundaries of the illustrations (that is, very little black ink outlines are used). Reimena provides samples of her drawing method with tools at the back of the Séance Tea Party. 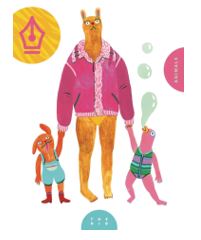 The Nib is published quarterly with each issue emphasizing a single theme. The Animals issue covers some medical topics including extinctions, PTSD, and environmentalism. In particular, six endlings (last of a species before extinction are provided) on page 2: Pinta Island Tortoise in 2012 named Lonesome George; 22: Thylacine in 1936 named Benjamin; 40: Orange Band Dusky Seaside Sparrow in 1987; 66: Pyrenean Ibex in 2000 named Celia; 92: Carolina Parakeet in 1918 named Incas; and 112: Passenger Pigeon in 1914 named Martha. There’s a story of Mansoor Adayfi, a detainee at Guantanamo in Cuba during the U.S. occupation of Afghanistan, who befriends some animals while surviving torture and PTSD; he’s never prosecuted before being released after 15 years (Caged Lives, 42-53). This issue has a story about goats, including pregnancy, milking, and slaughter of some kids for meat, as well as a farmer’s pregnancy and delivery (Bleating Heart, 54-65). There’s a story about bullfighting and spousal physical abuse (Bull Fights, 73-78). And finally, a story of bird smuggling (Stealing Rainbows, 81-91). 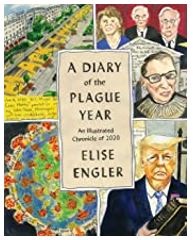 A Diary of the Plague Year: An Illustrated Chronicle of 2020 is Elise Engler’s contribution to the current pandemic history with almost daily images from January 20, 2020 through January 21, 2021 with 12 days missing and coronavirus or COVID-19 mentioned on 257 of the included days. Other than statistics, this diary is a Medical Mention because there isn’t much depth about the COVID-19 pandemic or other medical issues. This work does provide a lot of events with typically four or more images per day and a written diary entry. The diary entry is handwritten within the illustration and typed out, for ease of reading, on the page next to each image. Engler had started documenting days in this format on November 22, 2015—as the Diary of a Radio Junkie—of “an ordinary year in American life. [page 1]” While the images during this plague year “… were more urgent and tumultuous, with swirling forms that reflected the country’s sense of chaos and anxiety [5].” We get to follow most of the last year of the U.S. election cycle through President Biden’s inauguration. Somewhat confusingly, illustration dates appear to be when the drawing was created rather than the actual date of the events. For example, the January 6, 2021 U.S. insurrection-related images at the capitol building is dated January 7, 2021; and the Biden inauguration image is dated January 21, 2021. There are some non-pandemic medical issues that arise periodically, such as January 25, 2020 earthquake in Turkey when 22 died; February 18, 2020 has the Boy Scouts of America declaring bankruptcy because of payouts from their sexual abuse scandal; May 28, 2020—actual event date was May 27—AIDS activist, Larry Kramer, dies at age 84. And there are many environmental or climate change events documented, including devastating forest fires in California; June 23, 2020 record-setting Arctic temperature exceeds 100° Fahrenheit; and December 1, 2020 Brazilian deforestation at “12-year high under [President] Bolsonaro. [250]” The descriptions go well with the images. 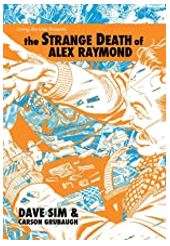 The Strange Death of Alex Raymond: A Metaphysical History of Comics Photorealism by Dave Sim and David Grubaugh is a meta-work out the wazoo with Sim putting himself into historical scenes among cartoonists and their creations following the ebb and flow of their photorealistic styles up to the point Sim could no longer draw … realistically or otherwise. He drew the first 207 pages of this work in the various styles of those he metaphysically follows to discover and solve Alex Raymond’s death. The artists he mimics are all male, primarily including Raymond (Rip Kirby, Flash Gordon, Jungle Jim, Secret Agent X-9), Hal Foster (Prince Valiant), and Milton Caniff (Terry and the Pirates, Steve Canyon) and secondarily those drawing from the school of Foster (Russ Heath, Jeff Jones, John Severin), school of Raymond (Al Williamson and Frank Frazetta, Carmine Infantino), and Caniff’s school (Joe Simon & Jack Kirby, Will Eisner, Joe Kubert). Note that all the cartoonists discussed are white males; and a lot of the imagery are of women. And what are those school styles? Sim writes for Foster “non-stylized realism is characterized by one hundred percent accurate anatomy and proportions: no exaggeration, no distortion, no illustration ‘tricks’ allowed. [42-43]” For Raymond “stylized realism is characterized by idiosyncratic ‘style-based’ anatomy with brush stroke and pen line ‘illustration effects’ substituting for actual detail. [44-45]” Caniff’s school of “cartoon realism is characterized by heavy brush inking and ‘rubbery’ bigfoot cartooning techniques applied to realistic subjects. [46-47]” In Strange Death Sim repeatedly shows the car accident of Raymond driving and Stan Drake, another cartoonist, as passenger in Stan’s new Corvette. Raymond, driving around a bend in the road, apparently accelerated and crashed into a tree. Drake, having been thrown from the car, lived with his ear needing to be sewn back on; while Raymond died. Sim shows the car accident—frozen in time and space—over and over while in between the accident Sim discusses the soap opera, white male-dominated, American cartooning world of the first half of the 20th century. This car accident occurred on September 6, 1956 when Raymond was 46. The Strange Death has two primary topics … one that’s amazing and one that’s confusing. The amazing aspect is Sim’s wonderful mimicry of the artwork of numerous cartoonists. The confusing aspect is Sim’s attempt at linking Raymond’s death to events occurring decades before the actual accident; especially trying to link dates with the multiples of the number seven, Margaret Mitchell (author of Gone with the Wind), and many other personalities, including those connected to the early days of the King Features syndicate. I suggest reading this book for the imagery alone; and it’s kind of fun to try to follow Sim’s “metaphysical history.” Sim not only draws himself realistically, but periodically as an elderly Charlie Brown knockoff, as well. Finally, there was one other serious medical occurrence, beside the car accident itself; and that being Sim himself unable to complete this project because of an undiagnosed malady occurring between 2012 and 2015 that sadly ended his ability to draw. He drew a few more images since then, but the work was brought to a close by Carson Grubaugh. It was never truly finished to a satisfying conclusion. This work began as 26 issues comic book series under the title Glamourpuss and was funded by a Kickstarter campaign. In his early creative period, Sim along with Gerhard created, drew, and self-published Cerebus, the award winning and longest continuously produced (300 issues) comic book series by the same creator. 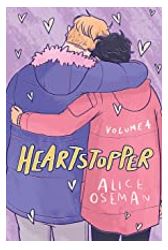 I don’t usually revisit a title that I’ve already included in a prior Medical Mentions (II), but I am now with volume 4 of Heartstopper by Alice Oseman. Volume 4 continues the relationship between Charlie and Nick, but this time emphasizing Nick’s concern about and Charlie’s actual eating disorder. Charlie fairly consistently avoids foods, passing on deserts, and eating little from his plate when food is offered. Nick spends time looking online about what eating disorders are, and how they should be brought up with someone who might have one, and potential treatments. The online research is presented periodically without overwhelming the reader. In addition, Charlie discusses his self-harm. Ultimately, Nick opens up about his concerns to Charlie (while Charlie wants to profess his love for Nick), and Charlie spends time in a psychiatric hospital for intensive treatments, including therapy. From a graphic medicine perspective, Heartstoppers 4 would have benefitted from more time spent on the eating disorder treatments, but this is a fictional work for teens and only meant to broach the subject and not to teach about how eating disorders might be resolved … it’s a very long, often over a lifetime, process. The imagery fits the story, being fairly relaxed with, friendly, laughing, loving, and concerned faces, at times, with the only color being shades of green and wonderful, expressive hand-lettering. Parent-child and peer relationships keep the story playful and sometimes serious. This work provides some mental health resources at the back, including National Eating Disorder Association (www.nationaleatingdisorders.org), Anxiety & Depression Association of America (www.adaa.org), Heard Alliance (www.heardalliance.org), and The Trevor Project (www.thetrevorproject.org). The author appropriately notes “…romantic love does not ‘cure’ mental illness, as movies often suggest! … Nick can be there for him, but Charlie has to find his own way to recovery. [page 377]” I do recommend this series for teens, and perhaps middle schoolers. 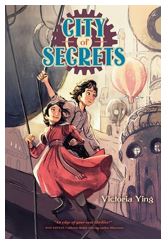 City of Secrets by Victoria Ying is a wonderful tale of mysterious goings on in a world of mythmaking and storytelling. Two children, Ever and Hannah partly learn from their parents about a secret Canary Society and partly discover for themselves the key to unlock a puzzle. There’re struggles between groups wanting to find the magics and perhaps control their power for good or ill. The storyline comes to a very satisfying conclusion in volume two, City of Illusions (August 2021). The medical part occurs about halfway through the City of Secrets when Ever becomes feverish after injuring his hand, becoming infected, and is treated with an anti-biotic cream (pages 102-110). Learning to find who one can trust is an important part of this work. The drawings are colorful with shading and expressive faces as we learn about the machinations of an entire city.