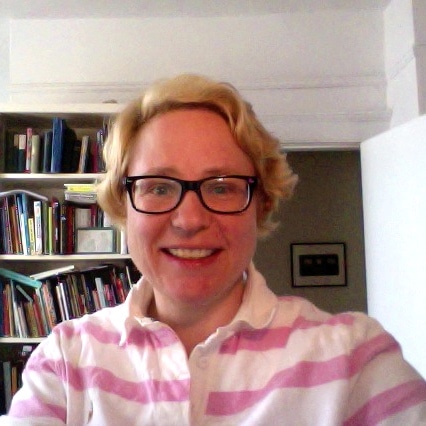 WHO I AM: MK Czerwiec (that’s pronounced sir-wick)

WHAT I DO: I’m a nurse currently working in the medical humanities. My past clinical experience is in HIV/AIDS care,  hospice care, and nursing administration. I make comics under the pseudonym Comic Nurse, and am currently the Artist-in-Residence at Northwestern Feinberg School of Medicine.

MY CONNECTION TO GRAPHIC MEDICINE: During my MA program, I focused some of my studies on the question of whether or not comics could have a legitimate place in critical dialog about health care. In 2010, I presented at the first Comics & Medicine conference in London, and was recruited as on-the-ground organizer of the second follow-up 2011 conference in Chicago. I’ve been on the organizing committee for Toronto and also this year in Brighton.

HOW I USE GRAPHIC MEDICINE IN MY WORK: Graphic Medicine is the primary content of my teaching and academic writing. I give lectures and workshops on drawing in the health care context. In my artwork, I am heavily influenced by many other creators in this sub-genre.

PROJECTS BY OTHERS I’M EXCITED ABOUT RIGHT NOW:

WHAT I’LL BE PRESENTING ON IN BRIGHTON: I’ll be talking about a potentially useful visual approach to bioethical decision making utilizing maps… I’m honored to be collaborating with a pioneer of literature and bioethics, Dr. Martha Montello, on this endeavor.

A FEW THINGS I’M LOOKING FORWARD TO AT THE 2013 BRIGHTON COMICS & MEDICINE CONFERENCE: It is going to be fantastic to see  presenters from prior Graphic Medicine events again, and also to meet new people working in the field. In addition, I am absolutely giddy with excitement about bringing home a new set of audio recordings for Graphic Medicine podcasts. Editing and posting the podcasts has been a fantastic opportunity for me to interact with each presenter about their ideas.  I’m also really excited about the addition of a marketplace for creators to share their work in con-style fashion.