Our pal Cathy Leamy, a.k.a @metrokitty has been in touch to tell us that Boston Comics Roundtable is hosting their annual free indie comics fest, MICE (Massachusetts Independent Comics Expo), this coming Saturday, September 29. 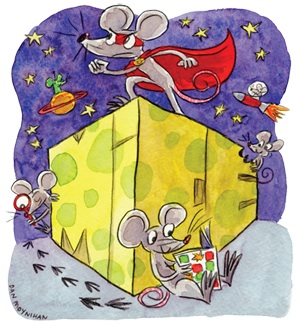 She is moderating a “Comics and Medicine” discussion panel at 11:00am – here’s the description:

“Health, illness, and the physical body are major themes in many graphic novels (such as Cancer Vixen, Epileptic, and Stitches). Doctors, patients, and health educators are getting involved with comics as teaching tools and as a method of self-expression and exploring physical conditions.

MICE is Boston’s only show dedicated to alternative comics, ‘zines, and web comics. The 2012 expo features over 150 talented and unusual regional cartoonists, offering a work in a wide variety of styles. This year’s special guest at MICE is Robert Sikoryak. A longtime veteran of alternative comics, Sikoryak specializes in meticulous and witty comics parodies as found in his collection “Masterpiece Comics.” His work has been published in legendary alternative comic “RAW,” as well as the New Yorker magazine.

With free admission, MICE 2012 is a great opportunity for anyone interested in the local independent comics scene to get a first-hand look at thousands of unique, entertaining and interesting comics, as well as meet the creators. Over 150 comics artists and small publishers will be exhibiting.  The show will include demonstrations with professional artists and panel discussions on topics central to comics and an exhibit of original art.