Some great Graphic Medicine-relevant work coming from Seattle’s Northwest Press, under the leadership of  Zan Christensen, one of Out Magazine’s Out 100 and Gay.com’s 13 to watch in 2013.

First, The Power Within, an anti-bullying comic. 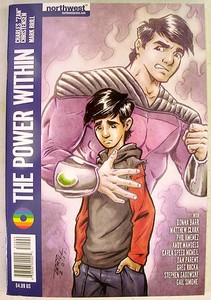 Second, Transposes, a graphic novel by Dylan Edwards with foreword by Alison Bechdel.  From the Northwest Press site:

Dylan Edwards’ Transposes separates gender from sexuality and illustrates six fascinating true stories of transgender men who also happen to be queer. The result is laugh-out-loud funny, heartbreaking, challenging, inventive, informative, and invites the reader to explore what truly makes a man a man.

Most recently, Northwest Press has released Positive, a graphic novel by Tom Bouden. From  the Gay League review,

The story frankly, tenderly, and humorously follows Sarah as she learns of her HIV infection, deals with doctors and medications (and scatological side-effects), tackles the issue of sex with her HIV-negative partner, and makes her way from terror and uncertainty to hope for the future.

I’ll be posting reviews of Positive and Transposes soon, but wanted to draw this great collection to your attention. You can also purchase Northwest Press titles on Gumroad here.