Saiya presented her work on Meatloaf at Graphic Medicine conferences in Chicago and Toronto. I asked her to answer a few questions about this unique collection bursting with diverse and empowering words and images. (Full disclosure, I have a comic in the book!)

MK: Tell us how this book came about, and in the process, describe for us what this book is.

The book started as a project at Eugene Lang College while Liza Bley and I were both there as undergraduate students.  Starting in 2008, we held an open call for young people to create comics that address a variety of topics involved with sex-ed.  We produced several issues of a sex-ed comic zine called Not Your Mother’s Meatloaf. Each issue included work chosen from a vastly varied group of submissions.  Our only requirements were that the entries be 8½ x 11 and in black ink. The comics are graphically illustrated personal narratives on different themes, such as “Firsts,” “Bodies,” “Health,” and “Age” and “Endings.”

As the years went by, we continued to compile issue after issue of the zine.  We put out six issues, each between 40 and 50 pages long.  Eventually it became difficult to handle the printing and distribution of the zine, as it had become so large and unweildy!   We were also craving a way to have a broader reach beyond the bubble of our feminist zine circuit, specifically to youth.  This is when I started writing a book proposal and contacting prospective publishers, and the book was picked up by Soft Skull Press, an imprint of Counterpoint Press, in June of 2012.

MK: The chapters of comics are organized by themes: Beginnings, Bodies, Health, Identity, Age, Endings, and Personal Best. How did this organization emerge? Were those the titles of the zine issues?

Although the chapters were organized based on the zine issue themes, we did quite a bit of re-organizing, editing, and developing of the chapters while we put the book together.  So, the chapters are a bit different than direct transfers of the zines.  We also added a whole chapter of new work at the end called Personal Best.

Liza and I both made comics that we submitted to each of the zine issues, but for the book, we also did something a little different; we each wrote some personal narratives that show how we relate to the comics we collected.  We wove that writing into the book in the form of introductions to each chapter, and we drew some panels that accompany our writing.  This way our writing and drawings are included in the book, but the comics are by a large variety of other artists.

MK: Joyce Farmer, legendary creator of Tits & Clits and Special Exits, wrote the foreword. In it she says, “Text, enhanced and illuminated by drawing, can transform a mere learning experience into something more personal, something memorable to the reader.” That’s so true, both of making and reading comics. How did you come to have Joyce write the foreword?

I had admired Joyce’s work from afar, both the early work from the 70’s and her current work.  I looked to her as a predecessor in the world of feminist and queer comics that deal with sex.  It proved for me that these were issues that had been alive thirty or forty years ago, and whose incarnations continue to affect us today.  I think that sort of placement in a genealogy was very inspiring for me.  It confirmed a feeling of being handed the torch and carrying it forward.  When I saw Joyce speak at the Comics and Medicine Conference in Toronto in July 2012, I was delighted to hear her speak about her experiences in the world of underground feminist comics.  I wanted to reach out to her and ask for her comments on our project, and I am honored that she agreed to write a short foreword for the book.

MK: As you mentioned, each chapter is introduced by a conversational text exchange between the editors, yourself and Liza Bley, occasionally employing a comic. How did this come about?

We played with the format of the book a lot, and we wanted to make it something a little different than the zines.  We each wrote anecdotes that we strung together and organized as introductions to the chapters.  The anecdotes are supplemented by small comic panels that we drew to accompany the writing, which are adapted from earlier comics we drew.

When we were collecting comics in zine form, we sort of took ourselves out of the process. We would talk to people about what we envisioned for the project, but we would act behind the scenes. In the process of putting the book together, we felt it was appropriate to explain where we were coming from and how we related to the comics we chose to include in the book. Liza and I were both challenged by this task. I felt pretty cagey about my personal life over the past ten years. However, I think that one of the main reasons I continued to work on this project is because it contains all the advice that I need, all the lessons that I need to remind myself of on a daily basis. I have had revelatory experiences and also ones that make my stomach turn to remember them. I am not some sort of perfect model of health and balance. I am working through these things and I am flawed, I make mistakes. I wanted to try to explain how I felt during some of them, and then to look around and see if that resonates with other people.

We had a hard time taking out comics from the zines.  We feel that every submission we received was valuable and unique in its own way.  For the book, we went through the zines and chose comics that we felt would work well together for each chapter of the book.  One of the things that we like most about the comics included is the variety of aesthetic approaches to comic creation that we received.  We feel that anyone can create a comic, and it was interesting to see such a wide range of drawing styles in the comics that were submitted to us.

We really promote the idea that comics are an accessible, DIY medium that belongs to everyone, not just professional artists.  Therefore we tried to showcase the art of those who may not otherwise have an opportunity to show art in this way.  Some artists involved have never drawn a comic before; some are avid drawers, some are tattoo artists or painters.  We feel sorry that we could not include more of the artists whose work was submitted, but we may be able to put together a Volume 2 in the future, who knows!

MK: What are your hopes as this book goes out into the world?

For me, it is always amazing to see another person’s creative response to their personal life. It is one thing to tell a story, but making something requires a different kind of effort and care. I hope that the comics and the writing in the book will demonstrate to readers a method of processing experiences, and inspire people to create things based on their own.

I also hope that the book will demonstrate why different types of resources are important. The book is not a sex education textbook or manual, and we did not attempt to make it that way. We felt that there was a lack of humanized information. We also felt that we were personally craving some affirmation of our own confusions and questions. I hope that by sharing the questioning, others will find comfort.

from “Nerve Endings” by Robnoxious

MK: Do you anticipate any resistance to the content of what the comics in the book portray?

The book is very frank and explicit when it comes to depicting sex and bodies.  We do not have a problem with this and we feel that honesty and direct discussion is something that is sorely lacking in the world of sex education.  There is a lot of awkwardness and shame surrounding the topic.  We also feel that not everyone will identify with the stories portrayed in the book, but they are still valid experiences that deserve to be heard.  The book discusses experiences of those whose perspectives are often silenced; youth, women, and queer people.  Everyone has a different idea of what age is appropriate for a book like this, and I think that each individual will have to decide that for themselves and those they know on a case-by-case basis.  We certainly understand that many could be offended by a book like this, however, we feel that it is an important resource and welcome discussion and debate about the issues discussed in the book.  Resistance is inevitable anytime something radical emerges and we are aware of that.

I saw on Facebook that you are going to be on a book tour. Where will you be, and when? Are you still open to adding events in case a reader wants to invite you?

Our book tour will take place during September and October, and the full schedule can be found on the home page of our website, www.notyourmothersmeatloafbook.com and also on our Facebook page atwww.facebook.com/notyour.mothersmeatloaf

Some of the events will be both Saiya and Liza presenting together, and others will be presented separately based on logistics and location.  We have worked on this project over the years while living across the country from each other!  The book tour reflects this a bit.  We are still open to adding events, if possible for us, and readers should feel free to contact us with suggestions. 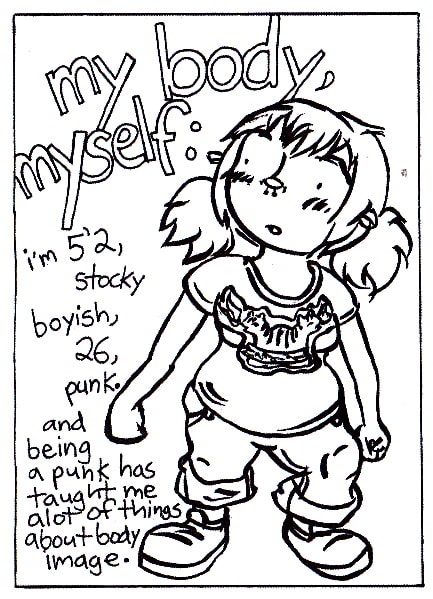 MK: Anything else you want us to know about this book?

This book would not have been possible without the help and input from our friends and collaborators.  We are so excited to be part of a larger world of writers and artists addressing issues where the personal and the political are mingling.  We also hope that this book will be shared far and wide with youth who are going through the tough years.  We feel that educators, activists, artists and health care professionals can all use this book somehow.  We plan to try to collaborate with as many of these people and organizations as possible!