The rumors you’ve heard that Primary Care is boring and repetitious are not true! Primary Care is an adventure, and I’ve accumulated the stories and anecdotes over 40 years in medicine to prove it! Yes, you see the same patients year after year, in sickness and in health. But you learn a lot about people and their behavior. You also learn a lot about the attitudes and concerns of staff. And if you attain an administrative position in a bureaucratic healthcare organization you gain an appreciation of a whole different way of life! What I found in all those years in clinic and leadership was that if you pay attention to the humor, silliness, frustration, tragedy and pathos that is part of day-to-day health care, a sense of excitement and adventure will lift you above the drudgery!

Those stories were still in my head when I retired. I had promised myself over the years that some of this stuff was so outrageous it ought to be in a book. But when it came right down to it, writing something as long and coherent as a book seemed a daunting slog and it kept getting pushed aside.

Then one day I saw a New York Times piece in which graphic artists presented news stories as cartoons, and something clicked. I had been an avid comic fan as a kid, amassing a large collection of comic books, mostly Superman and Batman (that new upstart Marvel didn’t quite do it for me). I also devoured every issue of Mad Magazine. And I always loved to draw. I drew my own comics in high school in #2 pencil on blue-ruled notebook paper, with text flowing around the punch holes. They were satirical lampoons and caricatures of my teachers and classmates. The episodes were distributed via the social media of the day: passing them among friends in class when the teacher’s back was turned. Eventually I got serious about my academics and the comics stopped, but the drawing continued. The margins of my notebooks from college and medical school looked like medieval illuminated manuscripts, the doodles crowding the actual notes off the page. But somehow while I was preoccupied with being a busy clinician and administrator, graphic novels and comics had become a respectable art form—and the possibilities of a new Adventure opened wide before me! It was clear that a comic strip was the ideal way to frame my memoirs: a series of episodes connected only by setting and the main characters. The burden of coming up with a coherent plot to tie everything together was eliminated! Episodes could be any length necessary to tell the story. I didn’t have to wait for the last chapter for it to make sense! 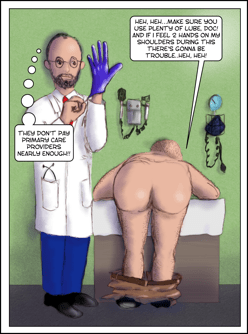 The first episode of the Primary Care comic was just testing the waters. To begin, I used ink and colored pencil, and scanned it into my computer to add the text and borders (eventually I went to all digital). I sent the link to my first episode to some colleagues in primary care, and was surprised at the positive reaction. In addition to affirmation of the spot-on depiction of clinic, there were also lots of questions from the incredulous: “Did this really happen?” (the answer is yes, it is all true). But as the audience gradually expanded, the most gratifying comments have come from non-medical people, who seem genuinely interested in understanding clinical interactions from the clinician’s perspective. “I hope it helps me be kind to my physician” was one comment. “Now THIS is the kind of medical sitcom we need. A story that shows that doctors have hearts that are warm and break.” “…it restores my faith in medicine…”

All it took was a little encouragement like that for me to really get excited, and plots for new episodes kept popping into my head. I resisted the temptation to focus on the administrative/bureaucratic frustrations and difficulties I weathered, concluding that was not unique to healthcare. Some colleagues suggested I use the strip to teach the principles of patient-centered primary care, but I think (hope) that it does that the way it is without being didactic. I try to keep the episodes balanced between patient-focused and staff-focused episodes.

Sometimes the strip does get on a soapbox–one episode was a tribute to Primary Care providers as superheros by way of a parody of the intro to the Adventures of Superman TV show that I watched voraciously as a kid: instead of “Look, up in the sky! It’s a bird!, it’s a plane! it’s Superman!” there was: 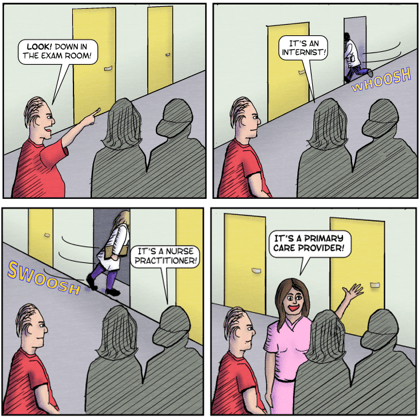 Another episode highlighted the efforts providers must sometimes make in order to appear professional and convince patients to do the right thing: 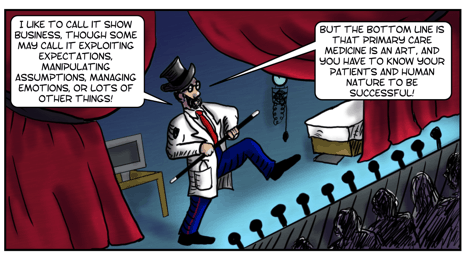 Adventures in Clinic has turned out to be a mix of wacky patient stories and nutty staff stories, some funny, some poignant, usually with a moral or comment that helps put it into perspective. Ultimately, the strip may be a modest contribution to restoring joy in Medicine for doctors, nurses, and other staff. Or it may help patients understand their healthcare team and their own responsibilities. Or it may be just a collection of humorous anecdotes from a long career.

Medicine, and Primary Care in particular, is about human responses to each other and to conditions that are sometimes funny, at times embarrassing, and often unpleasant. Seeing the humor from your own or another’s point of view, or even just recognizing shared experiences, can hopefully brighten the day of harried clinicians or worried patients. Whatever your perspective, I hope you enjoy reading it as much as I do creating it!

Richard C. Stark, MD is the former national Director of Primary Care Operations for the US Department of Veterans Affairs, where he led the implementation of Patient-Aligned Care Teams (PACT), VA’s medical home model. During his long career in internal medicine, he managed multiple outpatient clinics while maintaining an active primary care practice.

A graduate of Colgate University and New Jersey Medical School, Dr. Stark retired in 2016 and created the webcomic Adventures in Clinic. He lives in Columbus, Ohio and can be found on Twitter as @richstarkmd.