Getting Started with Graphic Medicine in Cartooning 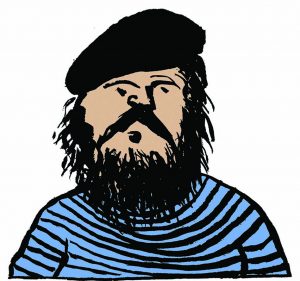 Bio: J. D. Lunt is a cartoonist, editor and educator. He is a graduate of the Center For Cartoon Studies in White River Junction, Vermont. He was the co-editor of When I Returned, the NEA funded comics anthology, as wells its sequel, the VA Innovators funded A Whole Lifetime of Firsts. He has written and drawn comics on topics ranging from mental health to the AIDS crisis, and from jazz and ancient wisdom traditions. His work has been featured and profiled by New Hampshire Public Radio, Unworthy, The Boston Globe and 7 Days Vermont. He lives in Rhode Island with his wife and her hairdresser’s dog. Read many of his comics at jdlunt.com.

How graphic medicine and cartooning intersect: Cartoonists put the “graphic” in Graphic Medicine. Without us academics and clinicians would have to bond over lesser arts, such as television and movies. Graphic Medicine also celebrates the many applications of comics in the real world.

Because comics are an accessible and easily digestible medium, they can be used to communicate important medical information in clear and concise ways across a variety of populations. They can also harness this accessibility to tell stories that challenge the dominantly held assumptions about medically marginalized communities. Comics are the ideal form to add complexity and nuance to a discussion precisely because the form is so approachable.

Just as importantly comics create space that allows for the unspoken to enter into Medicine. Comics have the ability to provide a visual vocabulary for abstract concepts. Comics also depict specific physical bodies within physical space. This allows for body language, and the way in which people engage with their environment, to become part of the Medical discussion.

From educational pamphlets to graphic pathologies, comics provide new ways of communicating with the human experience as it relates to Medicine.

I learned a lot of the above while I was a student at The Center For Cartoon Studies (CCS) from 2014 through 2016. I made autobiographical comics about my time in the mental health field, as well as my subsequent experience with work-related PTSD. I also wrote for and co-edited oral-history comics about the veteran population associated with the VA Hospital in White River Junction, Vermont, CCS’s home town. I have seen first hand the power comics have in allowing people to feel seen and heard as they take brave steps forward in owning their own stories. I have also seen how these collections of stories taken as a whole, can give a sense of richness and diversity to a population that many think they know already, through the flattened portrayal of veterans in the media. 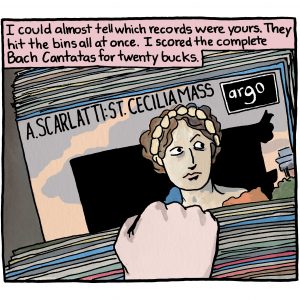 I presented my work with comics and veterans at the 2017 and 2018 Graphic Medicine Conferences. In 2019 I presented a workshop that used drawing as a way of making people feel more seen and heard. This workshop grew out of my experience and practice working with veterans. While attending these conferences I saw the serious way academics and clinicians are exploring comics through the lens of medicine. I saw brilliant presentations on comics and medicine including graphic pathologies, along with medical related readings of work from Indie cartoonists, prestige graphic novels and mainstream superhero comics. These presentations expanded my own thinking about all that comics can do.

How to get started: If you are a cartoonist interested in Graphic Medicine and don’t know where to begin, congratulations, you are already in! The comics world is small. All you need to do is make comics related to the medical world— they can be about your own experience with an illness. They can be comics about medical conditions, procedures or policies that you want people to know more about.  They can be mind-blowing cosmic or superhero metaphors. Or you can talk to people whose voices may be more marginalized than your own, and use your skills to collaborate with them on sharing their medical journeys. You may already have comics like this.  Share them on social media. Use the hashtag #graphicmedicine. Check out the Graphic Medicine website and explore the comics, criticism and research that you find there. Follow cartoonists connected to the Graphic Medicine movement. I have included some suggested readings on this page.  And also feel free to reach out.