Getting Started with Graphic Medicine in Public Health 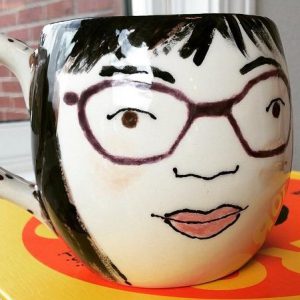 Bio: Meredith Li-Vollmer is a communications specialist at Public Health – Seattle & King County and clinical assistant professor in Health Services at the University of Washington School of Public Health. She has served in national capacities in the public health field for organizations including the National Academies, the National Association for County and City Health Officials, and the Center for Health Security at Johns Hopkins. Meredith is also a cartoonist and on the board of Short Run Comix and Arts. Her comics have been published in The Stranger, MUTHA, Illustrated PEN, and the American Journal of Public Health and she has presented talks on public health comics at San Diego Comic-Con, Emerald City Comic-Con, and the Comics & Medicine conference. She received a doctorate in communications from the University of Washington.

My Graphic Medicine Origin Story: Avian flu was my side door into comics. When I started working as a communications specialist at the public health department in Seattle, the threat of avian flu was in the news headlines and I was charged with promoting preparedness for a possible flu pandemic. In 2007, few people were aware of how catastrophic a global pandemic could be—we were so innocent then! And frankly, it was challenging to get anyone to pay attention to—let alone make plans for—an event that seemed so improbable at the time. It was only when people heard the real life stories of the 1918 “Spanish Flu” pandemic that they seemed at all engaged, astonished that a disease outbreak had so utterly shut down society and killed so many people around the globe. But I couldn’t quite get my head around how to make that storytelling work in mass-produced materials.

Then I read Scott McCloud’s Understanding Comics. Although I had only read a few graphic novels, McCloud’s illustrated explanations of the elements of comics sparked excitement about narrative possibilities for public health communications.

In 2008, I found and hired Seattle cartoonist David Lasky (who would later publish the Eisner award-winning Carter Family: Remember This Song). With David as the artist, I wrote No Ordinary Flu, a comic book telling the story of a family that lived through the 1918 influenza pandemic. To help readers visualize how this public health disaster could happen again, the comic also showed their descendants planning for a future pandemic. Over ten years later, scenes from No Ordinary Flu eerily played out as we lived through a global pandemic caused by a different deadly virus. 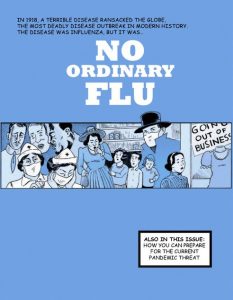 David and I continued to collaborate on comics projects, and we joined a local reading group that included cartoonists and comics scholars who shared our interest in comics and health. This welcoming group introduced me to the vibrant independent comics community in Seattle and I started taking classes and meeting other cartoonists through the local organization Short Run Comix and Arts.  With their encouragement, I started to create my own comics as a cartoonist, not just as a writer.

I attended my first Comics & Medicine conference in Baltimore in 2014. I was stunned to find hundreds of other people around the world who were shared an interest in the intersection of comics and health (and to see attendees live sketching sessions instead of taking notes on laptops!). And it was especially gratifying to meet others who made public health comics, like Whit Taylor.

Since that conference, the field of graphic medicine has blossomed in so many directions and I’ve had the opportunity to collaborate with many wonderful comics artists on graphic public health. And more than a decade after we first created No Ordinary Flu, the proliferation of amazing comics about the Covid-19 pandemic demonstrated that everyone has a public health story to tell.

The intersection of comics and public health: Comics have been used for public health purposes for decades. For example, in the 1980s and 90s, comics such as “The Adventures of Bleachman” and “AIDS News,” were used as outreach by activists and health agencies as the AIDS crisis unfolded. Global health initiatives also used comics to convey health information about HIV, as well as wide range of topics—such as immunization, water-borne diseases, guinea worm disease—especially to young people. Global health workers have also involved engaging youth in developing their own comics as a way of educating about pressing health concerns. The CDC has even launched zombie comic books to promote readiness for public health emergencies.

Didactic educational comics have been the most common in public health, and it’s easy to see how comics can be an effective medium for illustrating public health concepts. The visual vocabulary of images, expository text, dialogue, and sequenced panels can clearly and economically convey complex public health information, such as how flu viruses are transmitted or how epidemiologists track disease outbreaks.

Increasingly public health comics are taking more narrative form, including comics journalism, comics about public health history, and stories about people who are impacted by public health issues. In contrast to other visual forms of health communication—such as pictograms or illustrated diagrams—comics can harness emotion and empathy through its unique storytelling elements. And emotion and empathy are needed to tackle big picture issues about what makes populations and communities healthy, like the lack of safe biking routes or impact of sexual harassment on health.

The disciplines of public health and medicine overlap, as do the comics in these two fields. Both deal with the causes and prevention of illness, policy issues related to healthcare, and to some extent, treatment in clinical settings. But public health is also population health, distinct from medical practice, healthcare interactions, or medicine as a discipline.  Public health places greater emphasis on the structures, systems, and institutions that shape health outcomes, especially the factors that make some people much healthier than others.

Some comics in public health—such as those that educate about pandemic influenza or the benefits of vaccination—overlap readily with graphic medicine. Other public health comics don’t touch on illness, medical treatment, interactions between patients and providers, caregiving, or anything else directly tied to the healthcare system. Examples of published comics that live just outside the discourse of medicine are those addressing the implications of racist housing policies on access to food and outdoor activity, the benefits of food inspection systems, or the impact of climate change on health. Health is at the center of these comics, but they don’t necessarily intersect with healthcare.

By using the term graphic public health, I hope to attract and encourage more public health compatriots to consider the use of comics in communications efforts and to contribute their own comics that tell stories from the field. In my forthcoming anthology on graphic public health with Penn State University Press, I’ll go into more depth about why comics work for public health communication and what value comics can have in shaping understandings of the public health field. The anthology will include comics from a range of artists to show how we can harness the possibilities offered by comics to help people make better decisions that affect their health, make critical health information easily accessible, shift the public towards healthier behaviors, and shape perceptions about how policies and societal structures connect to their own health and the well-being of their communities.