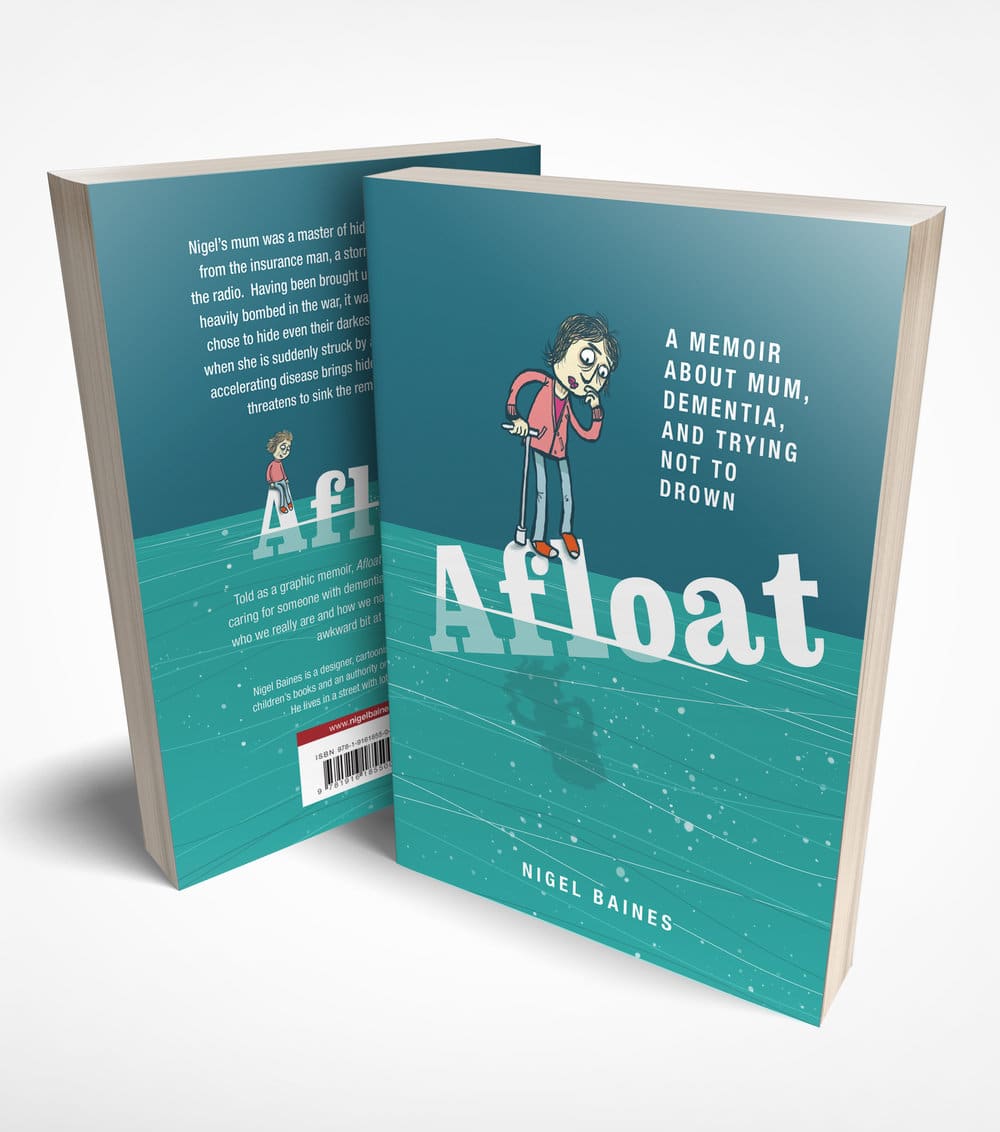 Growing up in a small Midlands town in England, one I describe as being like Shawshank without the redemption, everything felt safe, everyday moved seamlessly into the next. But occasionally there were ripples. In one room of our small terraced house my Dad put up some fake brick wallpaper. It was very much the thing in the 1970s. Make the insides look like the outsides, except Dad without realising put half of it on upside down.

The paper should have looked as though the bricks stood proud of the cement, the little shadow under the brick did that job. Turn it upside down and the cement stood out proud from the brick. Mix them together and you get an optical illusion. Suddenly a wall swims and turns in front of your eyes. It is dislocating when the sanctuary of home becomes uncanny and unfamiliar.

We like to inhabit safe places. Our towns, our streets, our friendship groups, our families, our bodies, our sense of self. What happens when that everyday structure turns upside down, when we are more aware of the cement than the bricks?

When mum developed dementia, that was when the walls started to spin. It was relatively short – just two years from diagnosis to death – but at the end I felt like I has been washed onto an island after years at sea. My work as an illustrator of children’s book was drying up, the future felt dried up.

In 2017 I closed my eyes, breathed in deep and jumped into a Masters in Authorial Illustration at Falmouth University. What followed re-decorated my life. Afloat is a 176 page Graphic narrative covering the time span of looking after mum, trying to record some working class history and exploring the things I discovered about the workings of life. The light bulb moment was the discovery of Graphic Medicine. Comics offer what Chris Ware called a unique ability to record the human condition from the inside out.

It was a fascinating process that I undertook alongside my research into the use of comics in autobiographical narrative. The first month was spent entirely on working out a structure and for this I probably boosted the share price of post-it notes. They were invaluable, not just for plotting out page sections but also for roughly working out panel structures within a page. 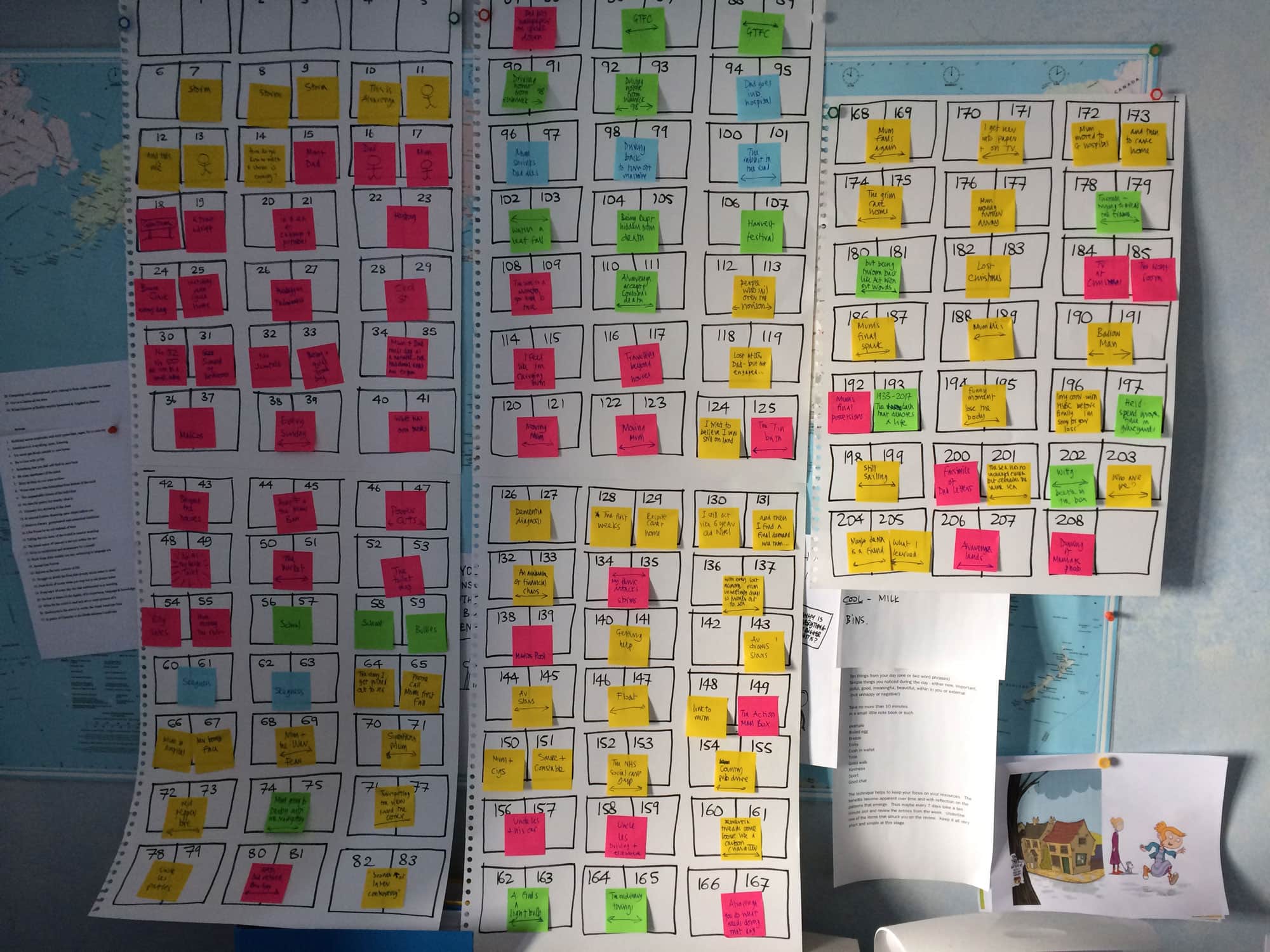 From here it was a day and night process for 5 months before sending to press. After making preliminary sketches in sketchbooks I produced the final job on a Wacom Cintiq 27HD with Photoshop. I could replicate the brush strokes of my sketches and, more importantly. Work quickly. In a sense, the actual quality of the drawing was a secondary thing. I wanted people to understand the image and see beyond it, to see the connection or images, to make their own images. 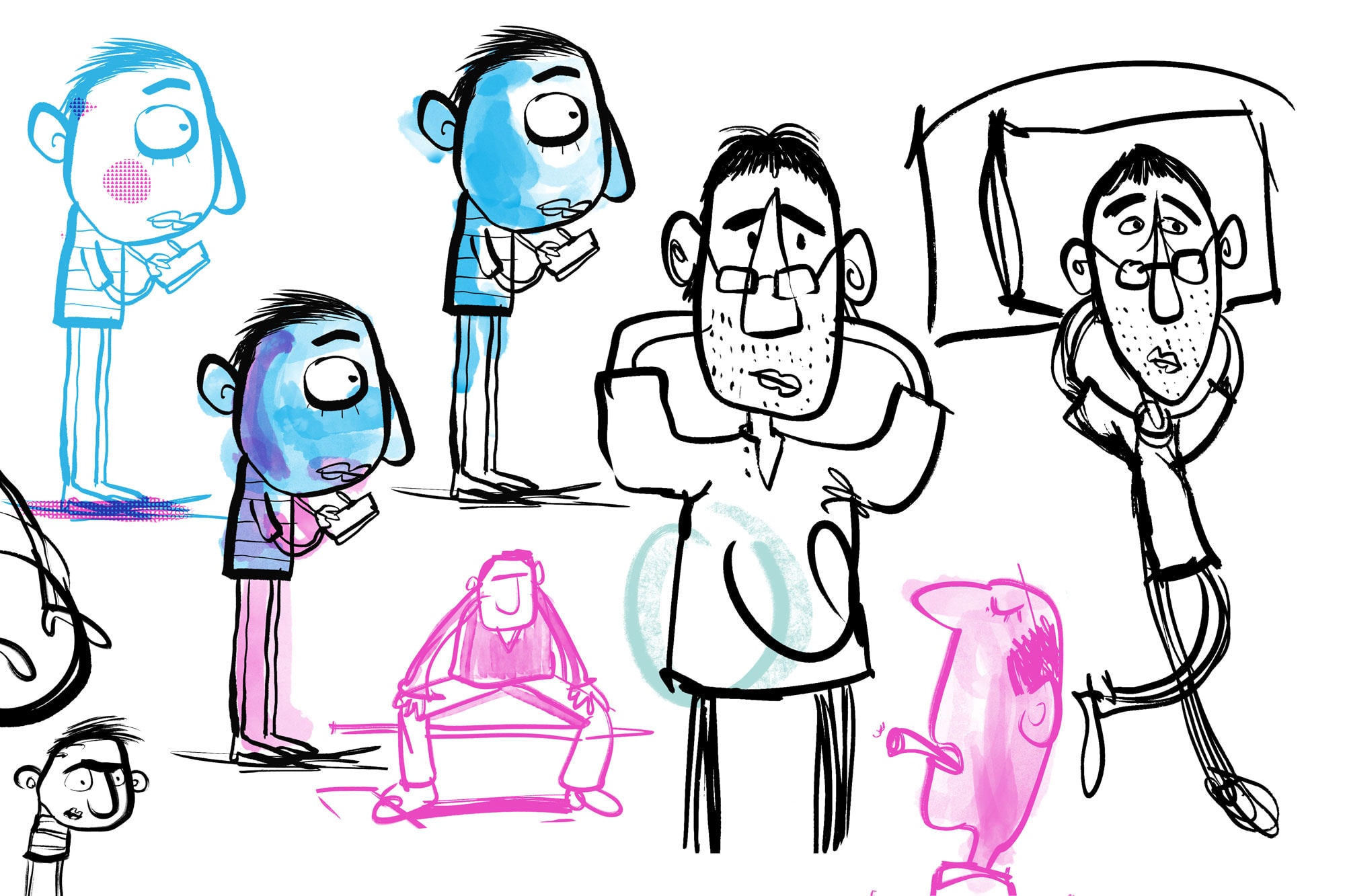 The magic in comics is in what is absent. The gutter between the panels.  The gap between words and pictures. This is where the reader becomes an active participant in the work. A lesson I learnt from my design education was that what was implicit was often more important than what was explicit. Comics function synchronically and diachronoically. A panel shows us a moment in time. The sequence of the page shows a period of time. Past and future constantly available. Comics can also keep scenes physically before the reader even though the narrative has moved on. A single panel never functions in isolation but is always part of the larger sequence. Each panel has content which ‘shows’ but it is the linking of these panels which ‘says’. 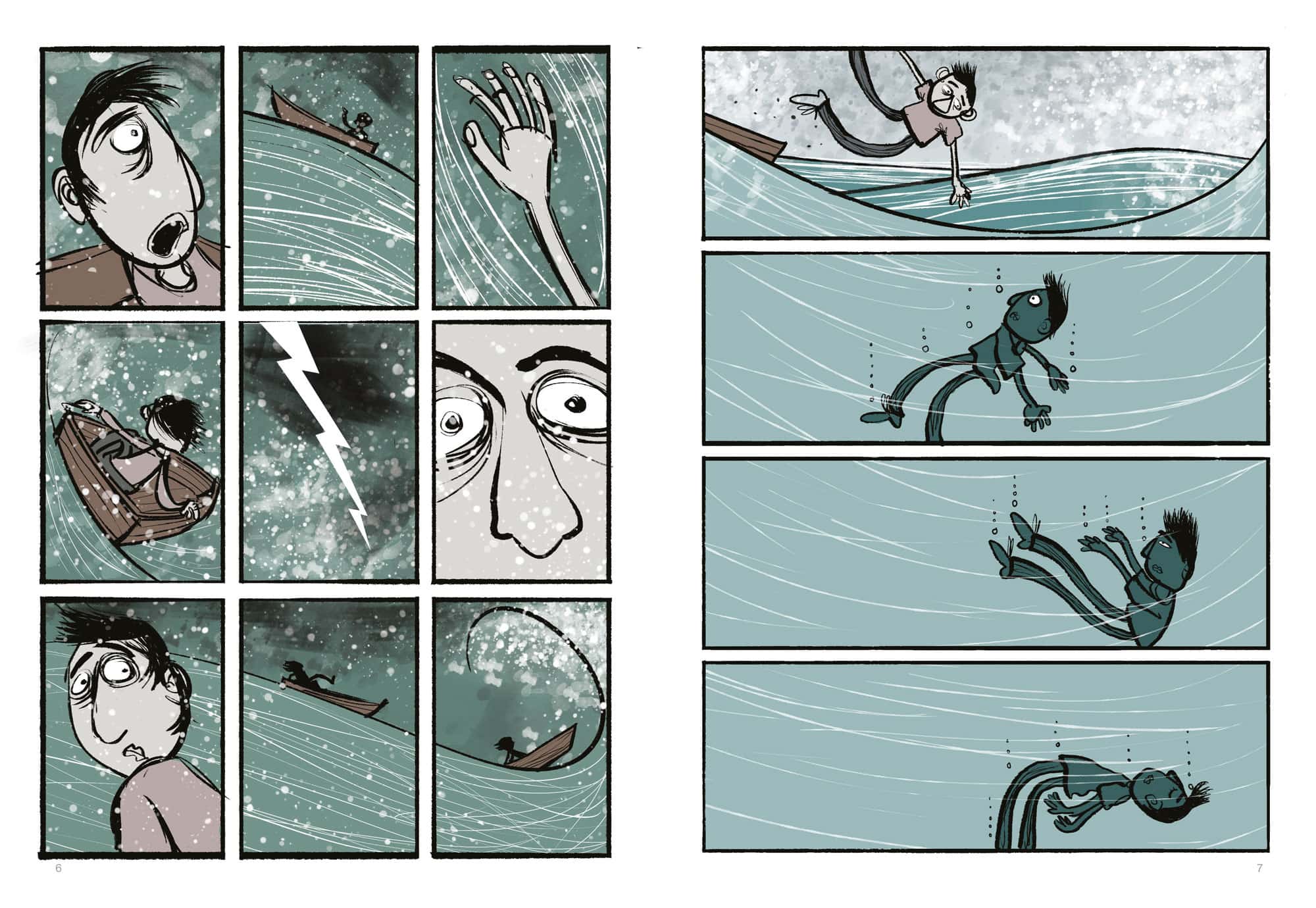 On occasion I could use the connotation with children’s comics to good effect as in the spread called ‘Oh Mummy’ that showed the unravelling that happens to someone with Dementia. 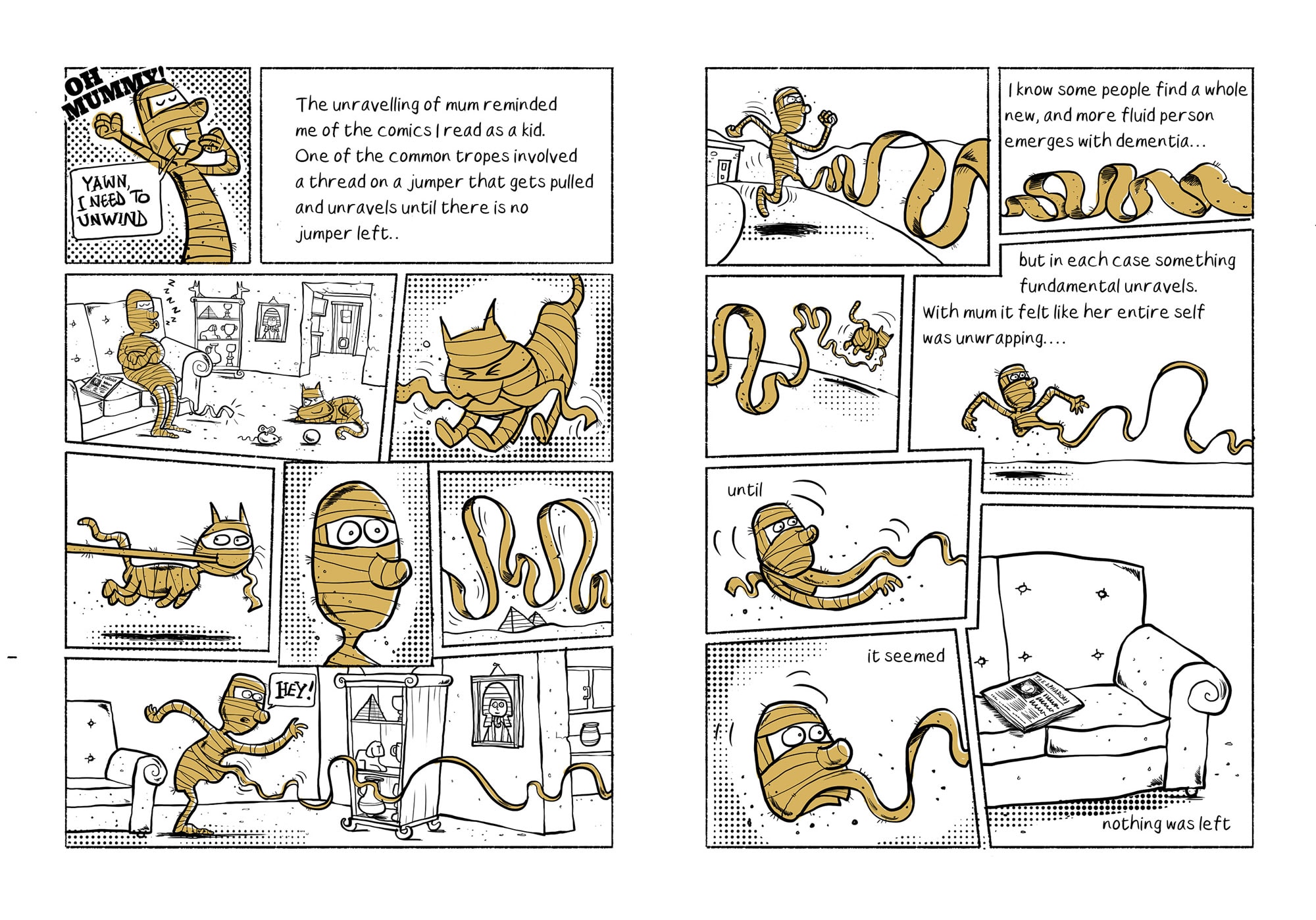 When the book was finished I was often asked if making it was a catharsis. I was sure it wasn’t. I felt I had found my way through the grief process and arriving on the MA was an emergence from that. And yet I realised a magic had happened. Something profound had been released. It is the power of graphic storytelling. I had taken something that was deep inside and let it find a life outside of me, like a surgical operation to remove a growth. That for me is the power of visual narrative. To make the unsayable, sayable and the healing that emerges from that. 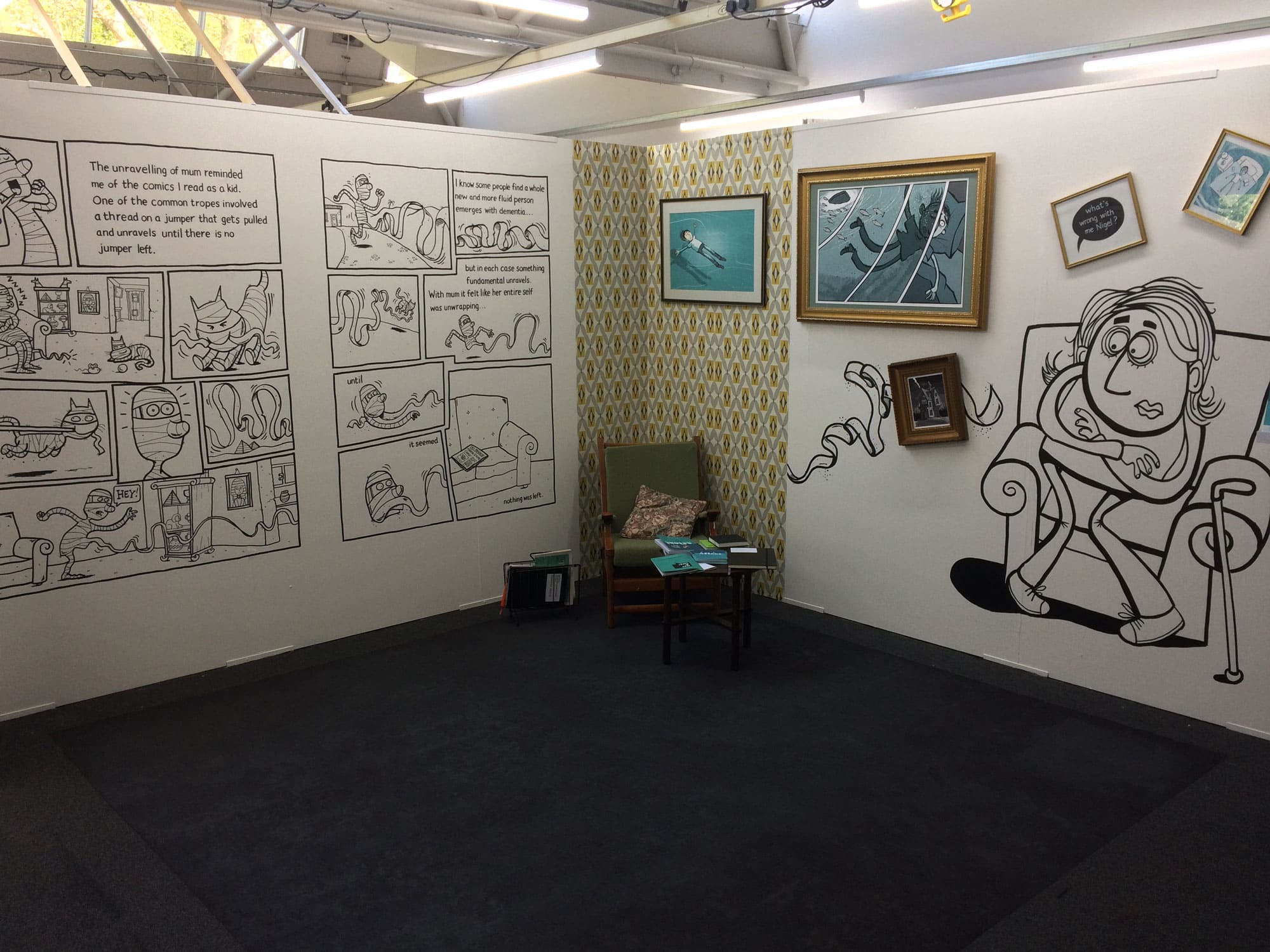