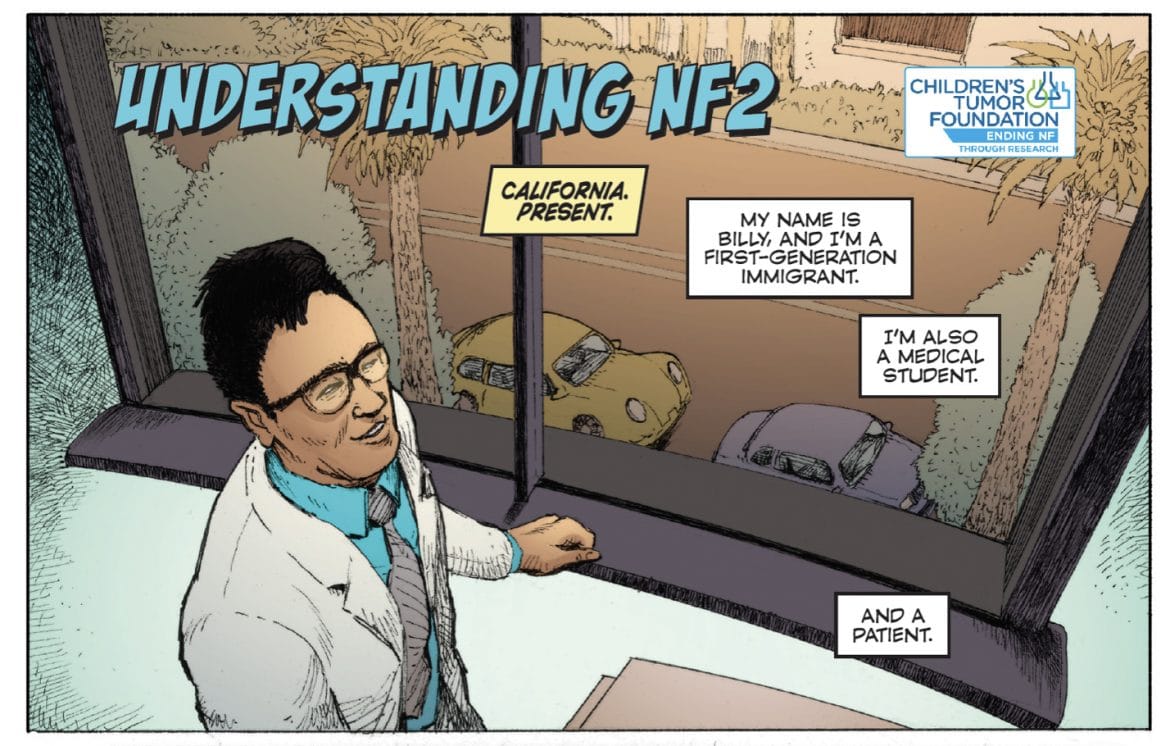 Understanding NF2 is a new short comic book based on the life of Billy Nguyen, who was diagnosed with neurofibromatosis type 2, or NF2, at the age of six. NF2 is a rare disease characterized by the development of benign tumors on the hearing nerves. The story tracks Billy’s childhood struggle to understand his diagnosis and navigate this difficult disorder. His Vietnamese parents spoke some English, but all the medical terms were too overwhelming, leaving young Billy to make a lot of adult decisions on his own.

I work as the Director of Communications at the Children’s Tumor Foundation, and much of my work at CTF is to create resources to educate people about all three types of neurofibromatosis. The more I worked on patient brochures over the years, the more I realized that we could make that information so much more accessible if we used the medium of comics. I had been working on an indie webcomic called Couri Vine for a number of years, so comics-creating wasn’t far from my mind.

When I first heard about Billy, who was a pediatric resident physician at the University of California, San Francisco, I immediately thought that his story would make a great NF2 comic. I set up a call with him, then immediately started writing a script. Four months later (on May 22, 2020 – NF2 Awareness Day) we released this new short comic book, which is freely available on the CTF website at ctf.org/billy.

With the help of the award-winning storytelling studio Bottled Lightning, an entire team of artists were engaged to work on this resource. The primary illustrator for the comic is Eisner-nominated artist Kevin Colden, who has a personal connection to NF through his wife, graphic novelist Miss Lasko-Gross. About his work on the comic, Kevin said, “My wife’s cousin has NF1, so I’ve personally seen how NF can affect families. Working with this script and being able to bring Billy’s story to life was a wonderful opportunity.”  In addition to Kevin and myself, Colorist Chris Sotomayor and letterer Nate Pride rounded out the creative team.

Understanding NF2 is part of the Children’s Tumor Foundation’s efforts to raise awareness about NF2, and create new educational resources for the millions of people worldwide who live with this rare disease. This is the third comic out of the Children’s Tumor Foundation, the others,  Moxie and Sparx Introduce the Accelerator and Moxie and Sparx Explain NF1, are also available to download for free from the CTF website at ctf.org/kids.