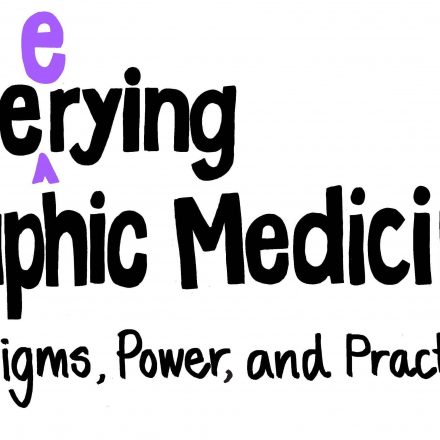 July 11-13, 2019 Hosted by Brighton and Sussex Medical School, at the Sallis Benney Theatre, Brighton, UK  The Graphic Medicine conference is back in Brighton. We first hosted this conference in 2013 and we are looking forward to welcoming friends old and new to participate in 2019. Our conference title is deliberately tricky. We hope this draws you in, not shuts you out. This year marks the formation of the Graphic Medicine collective, and this is the first conference under this banner. To us this represents an opportunity to query or question what graphic medicine is about. The time for… END_OF_DOCUMENT_TOKEN_TO_BE_REPLACED

Alex Fitch has broadcast one of the talks from the recent Brighton Graphic Medicine conference on his fantastic London radio show, Panel Borders. From his site: Homogeneity in Gay educational comics: Continuing a month of shows about gay and lesbian comics, Panel Borders presents a lecture by post doctoral researcher Doctor Jordana Greenblatt on the similarity in content of gay comics about safe practices and HIV, concentrating on Safer Sex Comix (by Alexander and Gregg, publ. 1987 by Gay Men’s Health Crisis of New York) and Alex et la vie d’apres (by Thierry Robberecht and Fabrice Neaud, publ. 2008 by Ex Aequo), recorded at “Ethics under… END_OF_DOCUMENT_TOKEN_TO_BE_REPLACED