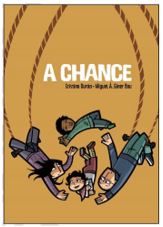 Book Review by Kevin Wolf   The two tales in A Chance had been separate graphic works by Cristina Durán and Miguel Ángel Giner Bou (Cris & Migue) published in Spain. They were Una possibilidad entre mil (2009) and La máquina de Efrén (2012). According to the United States’ Center for Disease Control there’s a 1 to 4 per 1,000 live births worldwide occurrence of those with cerebral palsy. The first story in A Chance is primarily about Laia—the daughter of the authors—born with cerebral palsy (CP), her parents’ CP education, and Laia’s treatments to reduce symptoms. The second story… END_OF_DOCUMENT_TOKEN_TO_BE_REPLACED