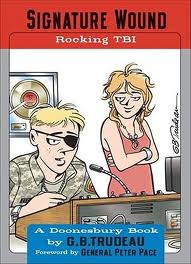 review by Graphic Medicine correspondent Ryan Montoya, MD I’ve never been a fan of “Doonesbury.” It’s not that I don’t respect how the comic strip has been in syndication since 1970 and has entered the national consciousness. It’s not that I don’t respect how author Garry Trudeau won the first Pulitzer Prize ever for a comic strip with his most important work. It’s just that I never connected with the material. Trudeau’s “Signature Wound: Rocking TBI” is a collection of “Doonesbury” strips from 2010 that focuses on the traumatic brain injury of Sergeant First Class Leo “Toggle” DeLuca. It is… END_OF_DOCUMENT_TOKEN_TO_BE_REPLACED