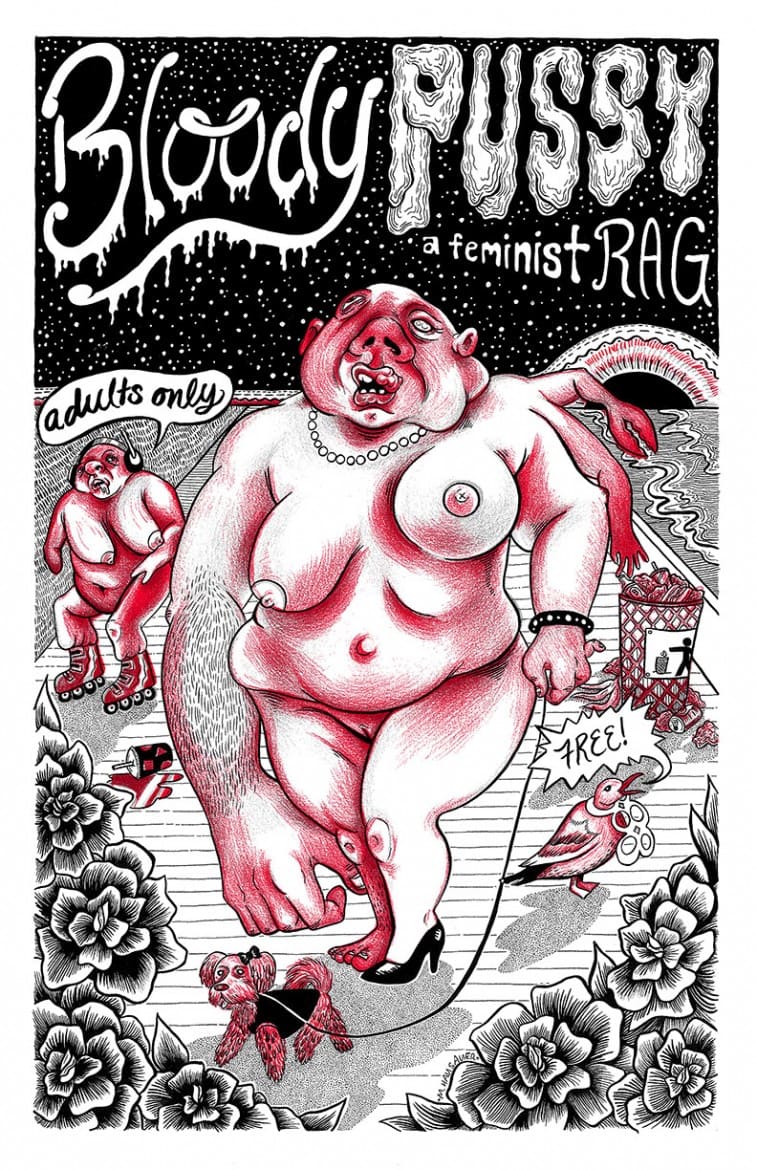 MK: Tell me the origin story of BP. Is there a name for the collective, a “mission statement” for the publication?

Kelly:  Eroyn, Mita and I were hard at work assembling another collaborative zine that we had just made (over food and wine) and we started talking about how we felt certain assumptions were being made in our local comics scene in regards to gender—that it seemed to be understood that women draw this way, men draw this way, and this made us, well … enraged.

Mita: We left a mission statement off of the paper because we wanted the art and the stories to stand on their own—to be powerful individual statements about individual experiences with the general theme of “rawness” in mind. We went into Bloody Pussy with the idea that it would be both the first and the final issue. That’s part of what makes the content so raw—it’s like “here ya go!” No explanation. No follow up. Just a bloody, pus-soaked mess! The three of us have been talking about editing other feminist-minded projects together as the Blood Sisters, but forming a collective hasn’t been a goal. That might change, but Bloody Pussy is it’s own special thing and for now we want to maintain the freedom to design projects without being tied to a specific mission or format.

Eroyn: We had a theme, not a mission statement. The tagline “a feminist rag” was critical. We wanted people to think about the blood and gore of being even the most delicate lady while also aligning with a purpose. There weren’t rules and we didn’t overthink it, which would have been really easy to do.  We did it for fun—to see where our sick minds would go—but we feel that the work in this paper is a feminist act.

MK: What are the goals you had in mind for BP?

Kelly:  We wanted the paper to just drop out of nowhere and really surprise people. We asked all the contributors to not talk about the project until that drop date. We wanted it to take off on its own—it doesn’t have a website, a facebook page, no internet presence for a reason; it was all about word of mouth.

Mita: Yeah the main idea was to shock people by springing this nasty gem on them and to get across that what seems shocking—sexual fantasy, menses, filth, etc.—is actually within the realm of the everyday. Our bodies can be gross and we’re okay with that. In fact, the grossness is sometimes what is enjoyable! What’s great is that in the process of making our comics, we ended up not caring about what we were responding to (I mean this general cultural assumption that women can’t be raw). Instead, we were just creating art and story regardless—stretching our imaginations and abilities. The reception has been incredible. People have been surprised, but also really excited.

Eroyn: Not having a goal was actually kind of a goal. It is the inherent inclination for all of us to organize events and promote the art of our friends and talented artists in our community so we actually had to consciously choose to not make a fuss. We’ve talked a lot about how the most subversive thing is often to take action and not point it out—to let the thing naturally be noticed for its impact.

MK: Is there a tradition (in comics, feminism, etc) you wanted BP to echo?

Eroyn: I remember at the age of 15 I saw the work of Marina Abramović, the Guerilla Girls, Cindy Sherman, and Yoko Ono and their visceral, iconoclastic sensibilities resonated in a way that I hadn’t experienced with paintings and other things I knew of as art. At a period when I was trying desperately to ignore my physical existence, these women all created work about the body—the place where women simultaneously have the least and most amount of influence and power. We see that a lot in comics. Phoebe Gloeckner and Julie Doucet were the first artists I saw whose female characters were fucked up in a way I could relate to and I was shocked by how they could show the reader versions of themselves that were so flawed, who made mistakes, and were grotesque. In other words human. This idea that women are fucked up is a weird cultural realization that somehow just happened even though it’s been palpable in art, music, comics, and life for a long time. Figures like Lena Dunham, Amy Sedaris, and Amy Schumer made it so that this idea can be found outside of intimate conversations with friends or tucked into museum exhibits with their only theme being the gender of the creators.

Kelly: Tits & Clits (an all-female anthology produced from 1972-1987 by Joyce Farmer and Lyn Chevely) was originally a response to the often misogynist Raw, but it rose above being just a reaction and instead became an awesome anthology on its own, with stories told from not often heard female perspectives. It was sex-positive, gory, bold, political, and just really fresh. What we have in common is a shocking title and great work within.

Mita: You hear the term “boys club” in relation to comics a lot, usually in reference to the history of comics-making, but to refer to current scenes as well. While I’ve seen small pockets of this simplistic gender exclusivity, it hasn’t been my general experience as an artist or reader. Still, those small pockets have a huge influence on the way people talk about comics because they are what history and perception confirm. Part of the work of feminism is to educate people about what’s actually out there and what, too, could be out there and to help change the discourse so it reflects skill and vision across gender categories and in the face of haunting historical norms. You can see that at work in Bloody Pussy.

MK: How were collaborators brought together? Were all submissions included?

Kelly: We chose to work with artists we knew in the Seattle comics community (and one from Portland!) who we felt could challenge themselves to do something raw. It was easier for some than others, but every single contributor totally went for it.

Mita: Since the contributors were invited, all submissions were included. There is so much mind-blowing and diverse work being done in our local comics scene and so we invited people who would represent different styles and who are at different points in their artistic careers. We took our editing jobs seriously, but we trusted the artists  on subject, story, and style and they totally delivered! We’re so proud of this paper—how each of the pages turned out and how it looks as a whole body of work. Eroyn did a bang-up job on the post-production side of things.

MK: Tell me about the distribution plan.

Mita:  There is no formal distribution plan. Each contributor received a set number of papers and we’re passing them out and stocking local stores and cafes. We’ve received requests from all over the United States—plus Canada, the UK, Australia, Finland. If people want a copy, they should email us and find out if there are already copies in their local comics shops. Otherwise, we’re just asking for shipping costs—it’s totally worth it!

MK: And what about future projects? Future plans?

Eroyn: The overwhelming amount of interest from readers and excitement from contributors makes it pretty impossible to let this be our last publication. The making of Bloody Pussy was such an innate process. I work with Kelly and Mita in a lot of different capacities and I feel really lucky to have this instinctual collaboration with 2 people whom I respect so much as artists and people. I’m pushing to have the next project be a book with a vagina dentata cover hand-cut with pinking shears (those ones with a zigzag pattern that scrapbookers use.) There’s some kind of joke buried in the craftiness involved since craft has historically been the women’s domain and is seen as wholesome, though I’ve seen some pretty dirty needlepoint in my day.

Mita: When the idea for Bloody Pussy erupted that evening, we were enthralled by it. We were all clenching the table in front of us, knowing we were going to make this paper happen. And then it drops at the same time that there’s this huge uproar against Donald Trump’s “blood coming out of her wherever” statement. Also at that same time Kiran Ghandi ran the London Marathon without a tampon in protest against period shaming. It all felt really serendipitous! But, yeah, Trump is still a front-runner for the highest elected office in our nation. And I have friends who aren’t receiving needed health care because doctors dismiss their period-related concerns. So I think the idea is to continue the conversations we’ve started through a variety of projects that excite and inspire us the way that Bloody Pussy has—like Eroyn’s vagina dentata idea. Working together has been a blast—confirming and unifying despite a sometimes apocalyptically bleak cultural context.

Kelly: The fact of the matter is that this x-rated feminist newspaper should not have been so shocking and the people picking it up shouldn’t have been so surprised at what we all have in us to say and to draw. Yes, I’m a woman who draws comics, and if you think you know what I am capable of, or the style in which I draw and tell stories simply based on my gender, then you need to slow down and look closer. I feel that this work, and these kinds of projects, need to keep showing up in our community. 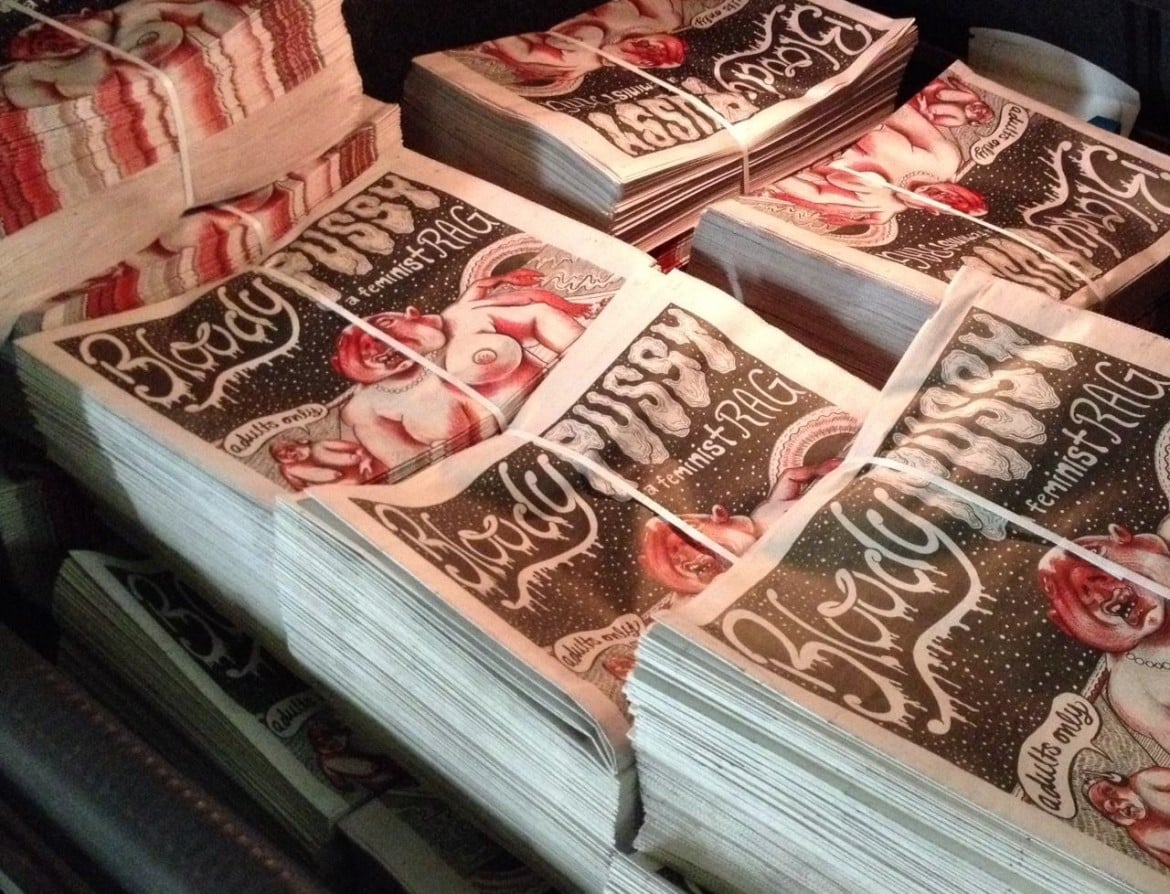