This week I want to keep it short and sweet by highlighting Just Peachy Comics – a webcomic I just discovered this week on Facebook thanks to a friend’s share. Holly describes her comics as a way to journal as her therapist suggested – lucky for us, the idea of traditional journaling wasn’t for her! You can support her on Patreon. 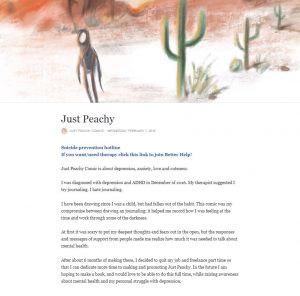 Webcomic: In 1996 Australia Enacted Gun Control. We Haven’t Had a Mass Shooting Since. via @TheNib

Webcomic: New comic on science and religion via @JordanCollver

“I Felt that Comics Could Play Various Roles Within the Theatre of Healthcare” – Ian Williams on Comics as Social Activism and the Birth of Graphic Medicine https://t.co/2TxTaXPl10 via @brokenfrontier

Thanks for sharing @NoetheMatt @GraphicMedicine, I hadn’t seen this excellent Crohns comic by @metrokitty for @Crohns_HU! As someone with Crohns (thankfully stable disease at present!) & depression it’s great to see comics discussing the pros & cons of invisible illness. #crohns https://t.co/ZQcfvXr1Qe

“As the comics industry generally pushes to diversify creators, characters, and stories, comics that emphasize health care and medicine must also be intentional in portraying diversity.” #GraphicMedicine @AnUncivilPhD https://t.co/CmrDaxvBn2

This comic illustrates how #graphicmedicine can be a space for #medstudents to grapple with medical hierarchy and loss of identity https://t.co/y55p95kPJB pic.twitter.com/vrpuVmR7EM

I will say, as a #medlibs, the phone panel is good to know. https://t.co/m0jhiZwY3q

The wonderful @JMBurns99 speaks about the role of health librarians in graphic medicine #hslg2018. Medicine is an art. pic.twitter.com/06UYqaJKpC

Great talk from @JMBurns99 on the role librarians can play in the development and engagement of graphic medicine #hslg2018 pic.twitter.com/0fizs9VEYh

How Medicine and Art have influenced one another through the ages – an insightful and thought-provoking talk from @JMBurns99 #hslg2018 pic.twitter.com/RVgURwAiF0

Now added to my reading list! In case it’s helpful to anyone else, here are screenshots of all the books that are in the trailer for Why Doctors Write. #narrativemedicine @NoetheMatt @GraphicMedicine @smizz https://t.co/Cyrvf2Yi8j pic.twitter.com/CISIWCKBXs

Why @Nadia_Shammas_ created a comic book featuring stories from people with chronic conditions and disabilities: https://t.co/zt3reo4OZy (via @comicsbeat)

Woke up to find that this month’s entire @JournalofEthics hit my recurring #GraphicMedicine PubMed alert! pic.twitter.com/5BFH8mpwAN

We are excited to announce that Forgiveness is Really Strange by @MCantacuzino and @DrMasiNoor is out now! This comic, based on science and real-life stories, illustrates the complexity of forgiveness and its potential for positive change. https://t.co/BertZGEkUq pic.twitter.com/QX02a1yeav

There are many reasons why #AdolescentMedicine is a field of study. These are complex, multifaceted young #adults, working out the ways of the world, and are wary of who to and how to trust. The best way in? Be authentic. Be real. Be caring. #teens are worth it. #graphicmedicine pic.twitter.com/bjt86yeL9e

This 17th century allegorical print represents the threat and eventual victory of Death. It show a man clinging to the tree of life, struggling not to fall into a cauldron containing a monster while a bear and snakes look on and rats gnaw at the trunk. #FolkloreThursday pic.twitter.com/tkmaw821ho

Can’t make it to Bethesda to see NLM’s “A Conversation about Graphic Medicine”? We can’t either – but fret not, you can livestream it! Part of our @HMSCountway community? Watch it with us! pic.twitter.com/4yvegvOECq

If you prefer to wait for a recording, the event will be made available in this searchable database – https://t.co/pmxSwBiWOq – some time after the event has occurred.

The power of comics journalism
The medium is able to narrate personal experiences more effectively than traditional journalism can https://t.co/VtfLsiKhdf #storytelling #GraphicMedicine

The @GraphicMedicine community reaches outside the webpage – when Skyping into classrooms, “The mission is to get cartoonists out of their basements and into the world” #medillnews847

Czerwiec says design teams in healthcare noticeably lack her colleagues: “You hear about design teams but not one of them is a cartoonist.” #medillnews847

So what have graphic medicine comics tackled in the last 10 years? #medillnews847 pic.twitter.com/eIzysUPzBa

Diversity is a hurdle – Czerwiec says her community hopes to reach across linguistic and country barriers and connect with bande dessinee and manga. #medillnews847

.@GoldFdtn is giving away 5 copies of the @inHouseMag #graphicmed book, “Family Doc Diary: A Resident Physician’s Reflections in Fifty-Two Entries,” an art journal by a #familymed resident about her intern year: https://t.co/QRWnLBxUwJ

Sure, it is still #flu season…but #strep still loves to make a show. Red, hot and sore. #visualdiagnosis #graphicmedicine pic.twitter.com/aRBBbna6nd

Very interesting. Thanks for sharing, Ian.
And… Yes! There is a need for greater ethnic, racial and gender diversity, as well as more diversity of specialties within the health care profession. #MedicinaGráfica#GraphicMedicine https://t.co/74ncsCAt9Z

#Repost @marciamihotich with @get_repost
・・・
Cover proof of The Inking Woman, 250 years of women cartoon and comic artists in Britain. Thanks to hand model and the editor at Myriad Editions, Corinne Pearlman. I have been working with them on the desi… https://t.co/3aV0qktxIt pic.twitter.com/Br1Vz2N54f

Not to mention how much they might appreciate having it 20 years later. I always encourage my students to keep a sketch journal. https://t.co/RJHvnlKxpl

Woo! Got to run my mouth about comics and medicine to a bunch of health communicators tonight! Thank you to @lisagualtieri for having me!

The winner of our Conley Art of Medicine contest shows how comics can inspire empathy for patients struggling with addiction and emphasize the ethical dimensions of complex health issues. Full comic in the link: https://t.co/6NOZheHrP0 pic.twitter.com/gNxzzLCZqm

Our March 2018 issue is live! And how awesome is this cover?! https://t.co/mWeJlYNkKG pic.twitter.com/usgeKkOq6x