This week’s highlight is actually a comic that was released back in December 2017, but I just discovered (or rediscovered – I honestly don’t know) it this week and feel compelled to make sure you see it as well. The comic is titled, Europe’s Waitingroom: Visiting the Refugees on Lesbos and was created by cartonist Aimée de Jongh after visiting the refugee camp Kara Tepe in October 2017 with 2 other cartoonists. I found it through The Cojo List, a periodic newsletter about nonfiction comics and it was published on Drawing the Times, a platform for publishing graphic journalism – of which there are numerous health related comics.

This comic – rightly categorized as comics journalism – shows pieces of Aimée’s experience and interactions with the people living (waiting) in Kara Tepe. In the same way that reading Rolling Blackouts by Sarah Glidden raises questions of journalistic ethics, moral imperatives, and puts you in a heightened emotional state of wanting to act but being unsure how to, this comic has a power all its own. You can read more about the decision to use the comics medium and what couldn’t be shown in this Dutch Newspaper article. [It will also provide you with links to comics created by the other two cartoonists on the trip, Judith Vanistendael and Mei-Li Nieuwland, which are equally worth reading.]

“But how is this graphic medicine” you, the reader, may now be wondering. Take a look at these panels from Aimée’s comic: 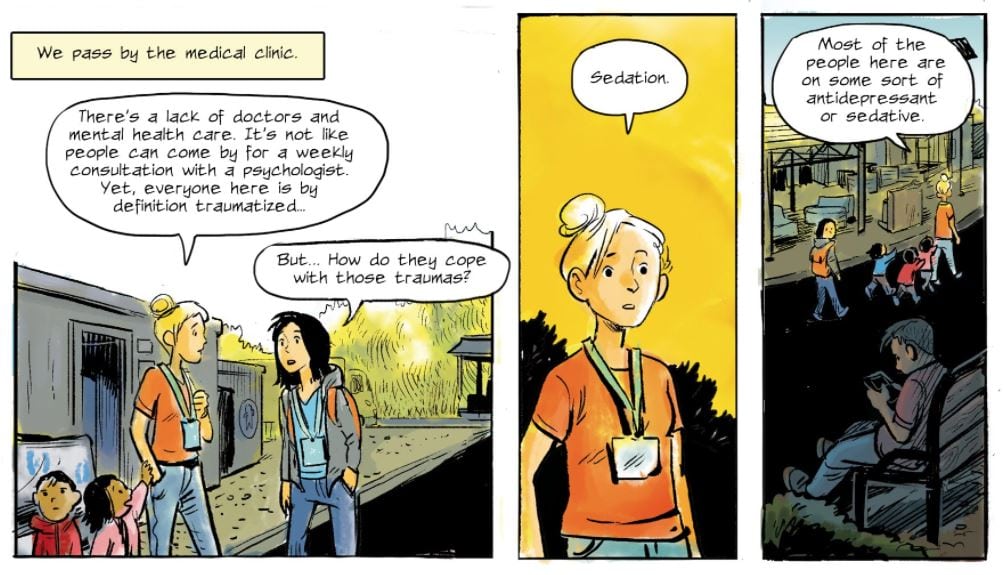 The very experience of living as a refugee, then, can be considered through the lens of medicine because of the impact trauma – in all its shapes and sizes – has on a person, both physically and mentally. Yet these people whose very lives have been uprooted are left with little-to-no access to healthcare and, in a strikingly Western way, are provided sedation and nothing more. Whether things improve, as the rest of the comic details, is often completely out of an individual refugees control. This comic forced me to ask, to my mind, a rhetorical question, but I’ll leave you with it to consider: shouldn’t we be ensuring proper access to healthcare for all refugees* as a matter of human rights?

*for all people, period. (See MK’s comic about the proposed HHS rule below for a continuation of this theme)

Matthew’s Note: This is a live-tweet stream/commentary by A. David Lewis, who invited me to speak on Graphic Medicine at MCPHS this past week. It was a great time and some interesting questions to consider arose – take a look!

Kickstarter: It’s All For The Breast – Comic Print Run via @AlexisDraws

Webcomic: So I’ve Had an Abortion. Don’t Hang Me For It. via @TheNib

Webcomic: Autism Isn’t To Blame For Bad Behavior via @TheNib

Webcomic: Making the Census About Citizenship is a Terrible Idea via @TheNib

Webcomic: Working Out The Kinks by G.C. Houle via @ErikaMoen **NSFW**

Matthew’s Note: I have done a horrible job of remembering to include OJST of late. Apologies for that to all!

Scholarly (Webcomic): Annals Graphic Medicine – The Cure Is at Hand via @TheBoonDocs

Library: Want to improve your clinical skills? Have you tried reading comics? via @minerlibrary

Interview: Thi Bui, author of “The Best We Could Do,” on Vietnamese identity and telling her parents’ stories

Interview: “I Always Think of Comics As My First Language”: An Interview with gg

Announcing the Winners of the Sixth Cartoonist Studio Prize

Contributed to a kickstarter for this ages ago. Discovering Flanagan as a teen with CF pretty much shaped and helped articulate my burgeoning thoughts on disability and led me down the path I’m still on today. Fight sickness with sickness! pic.twitter.com/ZTP2Bb46dY

My poster on the neurocognition of visual morphology in comics and emoji from #CNS2018 has now entered its second life as new couch pillows ? pic.twitter.com/urFf6vwq6w

But hold on. There are two different issues here. One is what is a comic (sequential art and the art of the invisible) and the other one (the one I’m interested on) What is graphic Medicine ?

2/2 We have great papers presented about single panel cartoons at the conferences although in general the focus has been on sequential art, maybe because so many folks are talking/writing about it. And making it.

Beast Boy going against his veganism because he understands the medical benefits of being consumed by maggots is quality #GraphicMedicine content. pic.twitter.com/UTrLeSXJSW

A comic I made about my father’s death in 2014. Tomorrow marks the fourth anniversary. (1/3) pic.twitter.com/7RJqbFmgkV

Today I will learn to draw dirt for an #angelbaby burial scene. #comics #graphicmedicine #miscarriage pic.twitter.com/pT9p15ZMWQ

There are, as of today, still only *3* records tagged with it. #GraphicMedicine https://t.co/bjNLk7UWMz

In our graphic novel, a #wearable device made of #nanorobots brings one back to life from the dead. Can this happen IRL?! In our latest blog post, we explore the science behind nanorobots & their real life advances in medicine. #graphicnovel #STEM #science https://t.co/FcdYmhxUrS pic.twitter.com/uo4CiLCpON

Looking on the Dark and Bright Side: Creative Metaphors of Depression in Two Graphic Memoirs #GraphicMedicine https://t.co/mjAhOVqyGm

No work today but sent my #1in4Zines artwork off to the printers for some #Riso action. Also got to chuck out 5 To Do lists! Feeling well productive & sh*t. Webshop coming soon…#Zines #indiecomics #1in4 #MentalHealth #SmallPress #SelfPublishing #MakeComics #GraphicMedicine pic.twitter.com/2P1OjCTsAs

Friends Keep Friends Alive! A comic about the dangers of drunk driving produced by MADD in 1989. #GraphicMedicine https://t.co/w1GhxgcHkp

“Most basically my selections were forced by page limits; academic journals usually stipulate word counts, whereas comics use page restrictions.”

#graphicmedicine account of work as a rehabilitation support care worker showing the reality some people face re: life at home after discharge from the hospital: “A Spoonful of Sugar” https://t.co/3hlqXe8YVN by @MichiMathias pic.twitter.com/EFDQAqLIr9

.@NarrativeMed .@GraphicMedicine #GraphicMedicine resonated with me when I was struggling yrs ago. Looking for recommendations of works and wisdom now. 2 family members are pretty sick. Sister is very sick with stage 4 #Cancer, another has rapidly progressing. #ALS. Tx.

#GraphicMedicine amazes me everyday. Look at this fantastic book coming out in May.https://t.co/FDiOYTTlgo

Comic narratives that give voice to non-normative, marginalized, and, in some cases, stigmatized stories in the arena of human reproduction. Assumptions are challenged, biases exposed, and stigma is lifted. Important contribution to Graphic Medicine. https://t.co/LDk4SV6COc

Kym and Rhiannon had such a fabulous day meeting so many budding artists at @AlderHey. Lots of character design, sketching and belly laughs! ?✏?? see you next week! #graphicmedicine #comics #arttherapy #youngpeople @BigLotteryFund #buildingstories pic.twitter.com/gQqGPnw4IN

So proud to be a part of this panel at #moccafest2018 with @Vineshtein and @Kriota. Be there this Sunday for a stimulating chat about pathology, anatomy and BODIES pic.twitter.com/wJ5eMB3br7

Just 1 supporter away from 90 wonderful readers of Barking my #GraphicNovel @Unbounders Please back my book & help bring it to print by pledging at.. https://t.co/4DgZLCIMMn#Comics #GraphicMedicine #mentalhealth #grief #1in4 #depression #ghoststory

Super excited to share the poster I’ve made in @canva advertising the new #GraphicMedicine Book Club Kit we have for the next month from @nnlmner! pic.twitter.com/lKwSHdzDlT

Daily life with my chronic illness can be very grim, but I feel like it’s important to show it pic.twitter.com/MHsSu0yVaC

My third place certificate for the Hiram College Graphic Medicine Competition arrived, I’m shockingly proud. If you want to read the short 4 page comic on how I got to be a radiologist, it is here: https://t.co/emjOeUyVCJ pic.twitter.com/tmhd2c4phb

Just got back from discussing @GraphicMedicine with folks at @MCPHS! Always enjoy sharing the field with new people and this was no different (plus it came with an intro from @adlewis, even better)!

There’s a live-tweet of my talk here from @adlewis – give it a look! https://t.co/B2PtZiV0cv

Take a look at this physician-drawn comic by Richard Stark, MD. https://t.co/ELNrzqzp7C

A student just shared that they were able to get funding for a small graphic medicine collection in their public library in part because of my NER webinar from last year.

In our graphic novel, a #wearable device made of #nanorobots brings one back to life from the dead. Can this happen IRL?! In our latest blog post, we explore the science behind nanorobots & their real life advances in medicine. #graphicnovel #STEM #science https://t.co/FcdYmhxUrS pic.twitter.com/uo4CiLCpON

What a talent…#graphicmedicine is a fascinating concept. I am familiar with #graphicrecording in teaching and at conferences, but this is new to me! Love the format makes a vivid visual impact that drives a message to a deeper level of understanding!

For Deaf History Month, I recommend one of the best graphic novels of the past decade for young readers. Heartwarming, informative, and inspiring, this autobiographical novel belongs in the library of every devotee of children’s books. https://t.co/xLpngT3FAv #Deaf #graphicnovel pic.twitter.com/woDaVaL09s

Work in progress: #comic abt #oldmomproblems w figures bc science. We’ve got 2 cases of plantar fasciitis & tendinitis. This baby is everything though ❤ pic.twitter.com/D5RzqTF9zA

If I can learn to be comfortable sharing my simple cartoons/comics in a lecture slideshow, you can too. #ThursdayMotivation pic.twitter.com/hBCBCcMqQ8

I’m going to “Comics and Medicine: The Ways We Work” – see you there? https://t.co/KisOJmVcgw @Eventbrite

Happy #Transdayofvisibility everyone, as elected goddess of the world I am here to give you all a thread of amazing trans people who you could support or at least follow.