Home / What is “Graphic Medicine”? 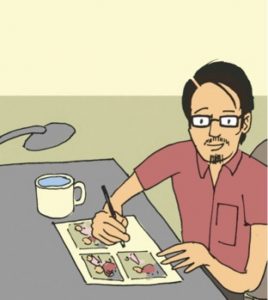 ‘The intersection between the medium of comics

and the discourse of healthcare’.

In 2007 I coined the term ‘graphic medicine’ for the name of this website, mostly because I thought it sounded good. I also began to use it as a handy term to denote the role that comics can play in healthcare and, over time, it has been adopted as the accepted term for this area of study and practice*. My use of the word ‘medicine’ was not meant to connote the foregrounding of doctors over other healthcare professionals or over patients or comics artists, but, rather the suggestion that use of comics might have some sort of therapeutic potential – ‘medicine’ as in the bottled panacea rather than the profession.

Over time, I was asked what the term meant and so, in the Graphic Medicine Manifesto, I provided the definition quoted above. I wanted to keep the definition purposefully broad, as, to my thinking, the discipline could include graphic memoirs of illness, educational comics for both students and patients, academic papers and books, gag strips about healthcare, graphic reportage and therapeutic workshops involving comic making, as well as many other practices and source material, both fictional and non-fictional.

*Michael Green and Kimberley Myers acknowledged my origination of the term in their paperGraphic medicine: use of comics in medical education and patient care BMJ 2010;340:c863