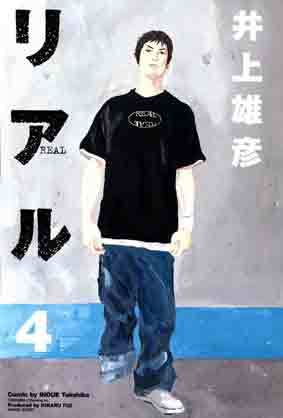 Drawn and written by the popular Mangaka (Manga authors) Takehiko Inoue, Real is an ongoing series, eight volumes have been published to date in Japan.

The story revolves around three young men, who have each faced disability in distinct ways. Togawa Kiyoharu was a teenage sprinter until he developed an osteosarcoma and had to have his leg amputated at the age of 14. He continued to vent his sporting talents after the operation by playing wheelchair basketball. The second character is Nomiya Tomomi who finds himself stationary in life, not because of a disability of his own, but because he was made responsible for the life-long disability of his motorcycle passenger who was seriously injured in an accident. Finally, Takahashi Hisanobu, paralysed from the chest down, was made paraplegic when he was hit by a truck. Despite the difference in personality and background, the three characters are united by their adoration of basketball, the choice of this theme possibly explained by Inoue’s passion for this sport.

Real has a much more serious tone and regard to basketball than many of Inoue’s other works, it explores the difficulties that the disabled feel when injured and rehabilitated, the manga also addresses the unsuitable state of society to play host for the disabled; how it is definitely a ‘walking man’s world’. Amongst themes of broken family life, of sudden life changes and psychological inferiority, the series seeks an answer in sport.

Being a manga art geek I have to mention the drawing style of ‘Real’: it is not typical of manga style and tends toward realism, although the panel breakdown is still designed for maximum impact and symbolism is often employed. This is a thoroughly enjoyable series, with exhilaration balanced by moments of pathos. Despite the theme of disability and problems faced, it is not a depressing story, depicting the life of the characters with hope rather than bleakness. I would highly recommend this series and hope it touches others the way it touches me.